A mother has claimed that her daughter was mocked by airline staff because her name is Abcde.

Traci Redford and her daughter Abcde, pronounced ‘Ab-city’ were at John Wayne International Airport in Florida when they heard a southwest airlines gate agent laughing.

“The gate agent started laughing, pointing at me and my daughter, talking to other employees,” the mother told ABC7 News. “So I turned around and said, ‘Hey if I can hear you, my daughter can hear you, so I’d appreciate if you’d just stop.'”

It wasn’t until she discovered a public Facebook post featuring her daughter’s boarding pass that she complained to the airline.

“While I was sitting there, she took a picture of my boarding pass and chose to post it on social media, mocking my daughter. It was actually brought to my attention by somebody who had seen it on Facebook and reported it to Southwest Airlines.” 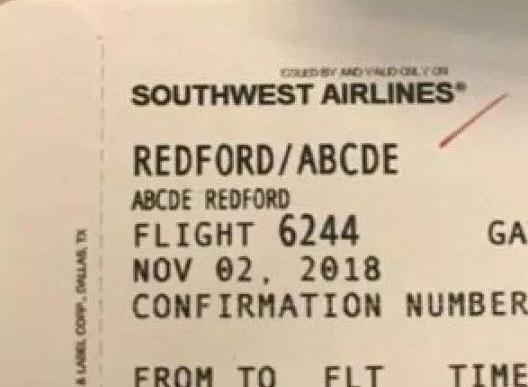 The young girl, who suffers from epilepsy, was reportedly upset by the incident.

Despite making an official complaint to the airline, the family did not hear anything from the airline for over two weeks.

It wasn’t until recently that Southwest Airlines took responsibility, stating that the employee in question has been spoken to, but did not disclose whether any disciplinary action had been taken.

“We take great pride in extending our Southwest Hospitality to all of our Customers, which includes living by the Golden Rule and treating every individual with respect, in person or online,” they said in a statement.

They acknowledged that the Facebook post “is not indicative of the care, respect, and civility we expect from all of our employees”.