Christmas will come early for Australia’s budding astronomers, with not one but two space spectacles scheduled for Friday night.

The Christmas Comet and the Geminid meteor shower are due to light up the night sky within just hours of one another.

The Christmas Comet – which is named for the time of year it appears – is expected to emerge from 9pm AEDT as a green and fuzzy comet in the east, close to the constellation known as Orion, or the Saucepan, ANU astronomer Dr Brad Tucker said.

“The green colour is coming from the gas that is coming off the comet,” he said.

“There is a bunch of ice on it and methane – it’s essentially like a dirty snowball and so when it goes around the sun it melts … and is a steamy, stinky green glow.”

This will be rare chance for Australians will have to catch a glimpse of the comet, which appears only once every five years.

Hours later shooting stars are set to flash across the sky as Earth passes through the tail of the 3200 Phaethon asteroid.

They’ll look impressive from the ground but the falling stars are actually just small rocks that have broken off from the asteroid before burning up in the Earth’s atmosphere.

“They’re about the size of a grain of sand, or even a small pebble and they’re travelling tens of thousands of kilometres an hour,” Dr Tucker said.

While observers will need a pair of binoculars or a telescope to catch the Christmas Comet, the meteor shower will be visible from anywhere in Australia, even major cities, so long as it’s a clear night.

Best times to see it? 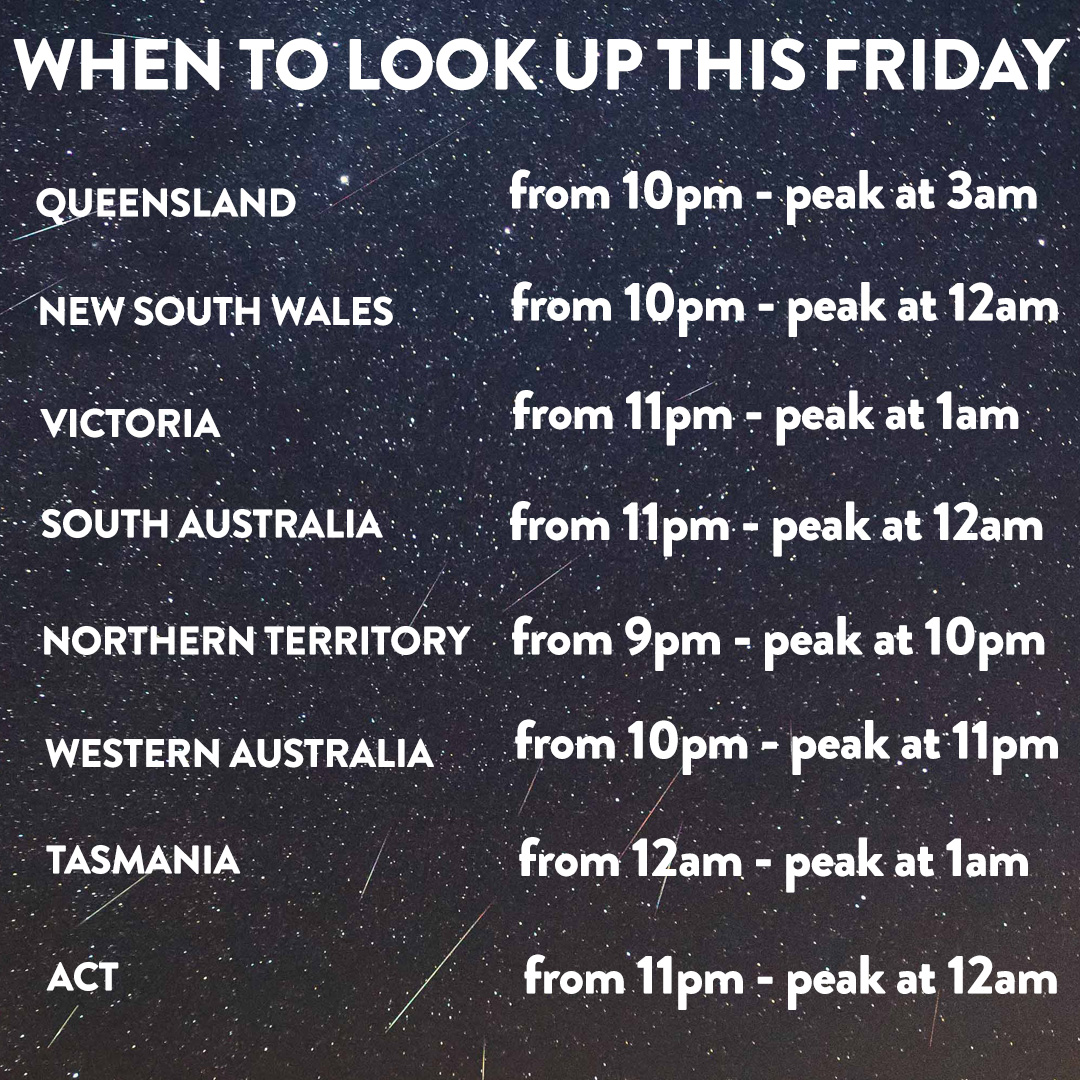 Will you see the Aussie space spectacle?

A Christmas comet and a meteor shower are set to appear across Australian skies on Friday night, but most of the country’s capital cities may miss out due to bad weather.

A cloudy night is forecast for Friday, but while rain is expected in the afternoon and evening it should clear in time for the comet and meteor shower around 9pm AEDT.

A cloudy night along with the chance of a thunderstorm is expected.

A cloudy night is in store, though the worst of a possibly severe thunderstorm earlier in the day should have passed.

A high chance of rain and a thunderstorm will leave the ACT with a little chance of glimpsing either comet or meteor shower.

Those living at the Top End may have a fighting chance to see the stars, with a partly cloudy night forecast ahead of a possible thunderstorm.

Clouds are expected to creep across the sky at night, with the chance of a Saturday thunderstorm forecast for the city.

A cloudy night sky is expected after a day of showers, which will ease as the sun goes down.

A partly cloudy night will mask the night sky, with a medium chance of rain.

For more detailed weather info, head to the Bureau of Meteorology