Tropical Cyclone Veronica has rapidly intensified to a category four system and is heading towards Western Australia’s north.

The Bureau of Meteorology says the Pilbara region may be severely impacted over the weekend.

“While it is possible the cyclone may weaken before reaching the Pilbara coast, a severe impact is likely,” the BOM said.

Veronica is estimated to be 385 kilometres northwest of Port Hedland and is moving southwest at 9km/h. 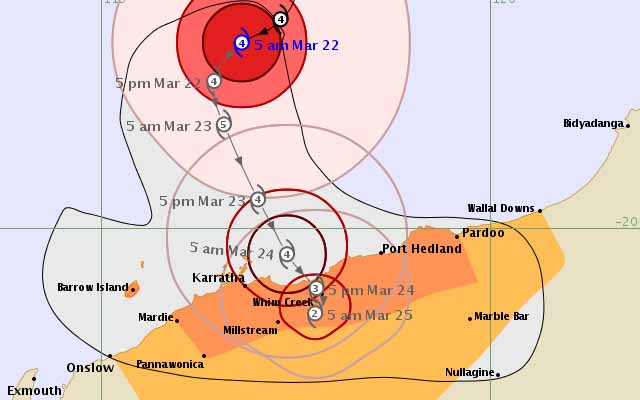 Gales with gusts to 100km/h may develop between Pardoo and Mardie on Friday evening, and may extend farther east to Wallal and adjacent inland areas later on Saturday.

Destructive winds with gusts exceeding 125km/h are forecast to develop along the coast between Dampier and Pardoo later on Saturday.

A Blue Alert is in place for people in or near communities between Mardie and Wallal, including Port Hedland, South Hedland, Wickham, Roebourne, Point Samson, Karratha, Dampier Barrow Island, Pannawonica and Marble Bar.

The Pilbara Ports Authority has begun cyclone preparations across the ports of Ashburton, Dampier and Port Hedland, with anchorages and berths being cleared in a staged manner.

The last category four tropical cyclone to impact the WA coast was Christine in December 2013.

Veronica is the third tropical cyclone for the season.