A scam which is apparently common over east seems to be doing the rounds in Perth.

It involves a ‘deaf’ scammer, asking for money by selling cards which have the alphabet in sign language printed on them.

The Sunday Times reported that a woman has been spotted approaching people at WA offices and cafes, with an introductory card. 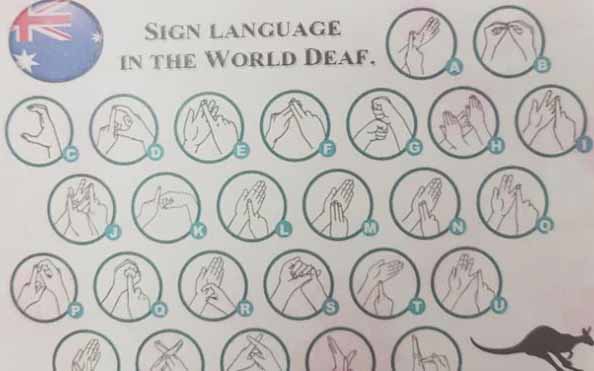 The card reads as follows:

I am deaf since childhood. This is the voice of a group of deaf people. Our goal is to earn a living. Buy please this alphabet which costs $5. And many thanks to you and your family.

The paper spoke to Lauren Emmens who said the woman approached her at Gino’s in Freo. Thing is, Ms Emmens said she knew a bit of sign language.

“I actually signed to her: ‘My name is Lauren’,” she said.

“I found it very strange when she didn’t sign anything back to me but just nodded.”

Ms Emmens and her friends gave the woman some cash before she walked off. They then remarked that they probably just got scammed.

Similar stories of what’s thought to be the same woman have surfaced from Bibra Lake, Perth and in Osborne Park.

“I suspected she was a fraud as she had no credentials,” the Ossie Park retailer told The Sunday Times.

“We were all busy with customers and she insisted on waiting until we were free and approached us separately, presenting us with those alphabet cards, essentially asking for $5.

“She didn’t speak to us and gave us the impression she was deaf.”

Access Plus WA Deaf chief executive David Gibson said it was a common scam over east.

“If the person is hearing and they are purporting to be deaf and trying to deceive people and take advantage of their goodwill, that’s really disgustingly low,” he said.

“That is taking advantage of what is a communication barrier.”