He shocked us all when he got down on one knee and proposed to his fiancée Roslyn Buerckner at last month’s Melbourne Cup, but it appears Sean Hollands has surprised us yet again!

The former Married At First Sight star is set to become a dad!

The former TV groom took to Instagram to share an ultrasound snap, writing: “We’ve got some really exciting news that we are so blessed to be sharing – a special new addition will be joining our splendid blended family in 2019 and we are just beyond thrilled.”

While many were supportive of the happy news, others were understandably confused, with one fan writing, “Haha I thought geee that doesn’t look like a human fetus…”

Here’s a lesson in Instagram – always read the caption!

“Wonder how many people won’t read the caption properly and think that you’re having a human bub,” another commented.

Many obviously didn’t read the final lines of Sean’s caption, which read: “We are over the moon to have received a positive 45 day test for our favourite mare to Australia’s leading first season sire – Better than Ready!” 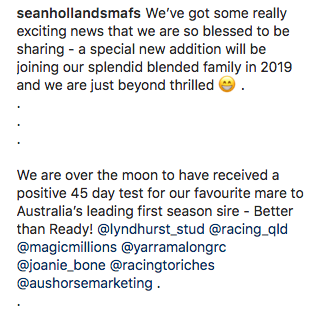 It’s official – Sean and Roslyn are expecting a foal!

Despite the cheeky announcement, fans congratulated the couple on their upcoming four-legged baby.

Sean was left heartbroken when his on-screen bride Susan Rawlings declared their relationship was going nowhere on season four’s final episode of Married At First Sight. But, it appears he is now in a very happy place.

Congratulations to the beautiful couple!