The first edition stories, including Live And Let Die, are inscribed by the author to the playwright, composer and actor.

The Noël Coward Foundation is selling the books at auction house Christie’s.

Books also include On Her Majesty’s Secret Service, The Spy Who Loved Me, You Only Live Twice and Thunderball – the first Bond novel to introduce the Spectre crime syndicate, led by Ernst Stavro Blofeld.

The Spy Who Loved Me, the shortest and most sexually explicit of the Bond novels, is also up for sale with the inscription, “To Noël, read and burn! from Ian” 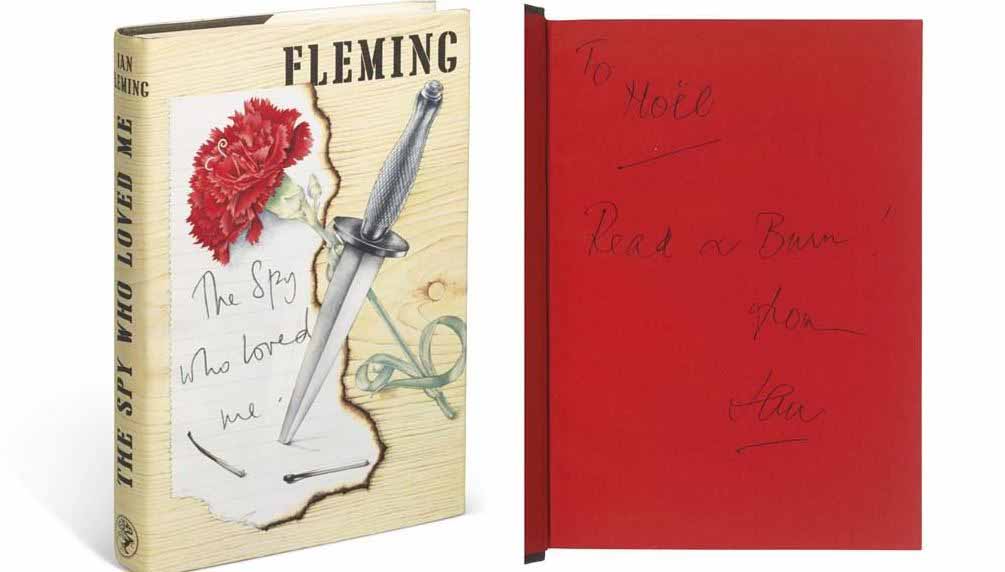 Fleming references Coward in You Only Live Twice, the final Bond book to be published during the author’s lifetime.

Bond quips to Blofeld after an explosion: “Now bring on the 12 she-devils, and if they’re all as beautiful as Fraulein Bunt, we’ll get Noël Coward to put it to music and have it on Broadway by Christmas.”

The Bond books, with some expected to fetch up to STG20,000 ($A38,370), were written at Fleming’s Goldeneye estate on the Jamaican coast, where Coward was a neighbour and his closest friend.

According to Christie’s, Fleming began writing the Bond novels with Coward’s encouragement.

When Fleming married in 1952, Coward was one of only two wedding guests – and in the same year he was made godfather to the writer’s newborn son.

After Fleming died in 1964, Coward wrote that he was “miserable” and it “is a horrid but expected sadness. He went on smoking and drinking in spite of all warnings”.

Mark Wiltshire, Christie’s associate specialist, books and manuscripts, said: “These first editions provide a window into the fascinating friendship between Ian Fleming and Noël Coward, neighbours in Jamaica and two of the 20th Century’s most famous personalities.

“Each volume is inscribed by Fleming with a personal message to Coward, often playful but also filled with respect and gratitude for his encouragement in the early days of Fleming’s career as a novelist.

“They have come to market for the very first time directly from The Noël Coward Foundation, and are sold to benefit their educational and development projects across the arts.”

The books will go under the hammer at Christie’s Valuable Books & Manuscripts sale in London on December 11.

Missed The Bunch with Clairsy & Lisa? Catch up by clicking play below!
007 james bond

Trailer For The New Bond Movie 'No Time To Die' Is Here And So Is A Release Date!

Charge Your iPod, This Doco On The Rise Of The MP3 Will Take You Back