We all remember the star of the final season of Game of Thrones: that Starbucks coffee cup that inexplicably sat in front of Daenerys Targaryen.

One keen-eyed viewer has spotted a very out-of-the-correct-time-period stainless steel water bottle AND a plastic water bottle in the film Little Women.

Honestly, are crew members just doing this on purpose? Do they want to give editors nightmares?

PLEASE THE HYDROFLASK AND WATER BOTTLE I CANNOT pic.twitter.com/KxwFOSAfOL

The stuff-up was spotted by a TikTok user then shared on Twitter, with the bottles spotted in the mansion behind Chalamet.

Naturally, the internet loves it.

Twitter user “Little Women HydroFlask” (we’re wondering whether they had this name before or after the flask was spotted) shared a screenshot of the film’s updated IMDB page, listing HydroFlask as one of the leading actors in the film. 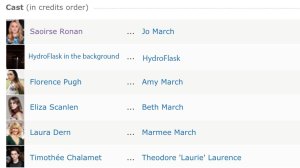 Who knows maybe it was all a bit of some very strange product placement…for water bottles?

Or maybe it was meant to be there, and it’s a commentary on the choice we have between responsibly reusing our resources and consuming.

Probably not. We think it was just a major stuff-up.

Game of thrones had a similar Easter egg. They placed a Starbucks coffee cup after the long night episode. To symbolize how the show runners stopped giving a shit and wanted to be out the door fast as possible. pic.twitter.com/g6MtM2ov6N

Missed The Bunch with Clairsy & Lisa? Catch up by clicking play below!
Fail game of thrones Little Women movies