A German tourist owes his life to a pair of jeans he used as a makeshift lifejacket while lost off the coast of New Zealand.

Brothers Arne and Helge Murke had taken a job to deliver a yacht, called Wahoo, from Auckland to Brazil and were almost 30km from NZ’s Tolaga Bay when Arne was knocked off the boat.

“I was dragged next to the boat for one or two seconds down in the water,” Arne told NZ’s Herald on Sunday.

“Then the rope got loose luckily, and I was floating in the water not wearing any life jacket. Just my t-shirt, my jeans, that was all.”

His brother threw him a life jacket with a rope, but he couldn’t reach it, Arne was already too far away.

Lucky for Arne, he was wearing jeans and, crucially, remembered a technique used by the Navy SEALS he saw a few years prior.

“Without the jeans I wouldn’t be here today, they were really the thing that saved me.”

“I saw it many years ago and I always thought if I ever go overboard without a life jacket I’m going to do that,” he said.

Arne took his jeans off and made knots at the end of the legs and inflated the jeans. 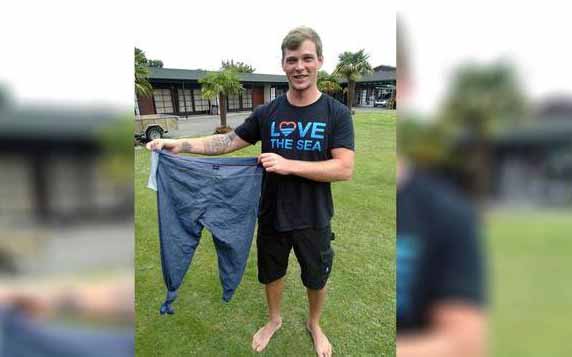 “[I pulled] it over water and get air inside and then push it under water – I had like an improvised life vest.”

He was lost at sea for about three hours before he was found.