One thing we know about Pink, she’s straight-up savage when she claps back at trolls who attempt to have a go at her family.

The latest shutdown was over a follower who criticised a family photo she posted to Instagram on Friday.

It showed the 39-year-old having dinner with her husband Carey Hart and their two kiddos, daughter Willow Sage, 7, and son Jameson Moon, 2.

“At least twice a week on tour, we shut the door to the outside world and have family dinner,” Pink wrote. “As you can see, it makes Jameson feel deep, deep joy.”

One of her followers commented: “Except it’s posted on ig”, seemingly pointing to call Pink out for saying she was shutting out the “outside world” on Instagram.

Pink has 5.6 million followers on Insta and responded in typical Pink style. 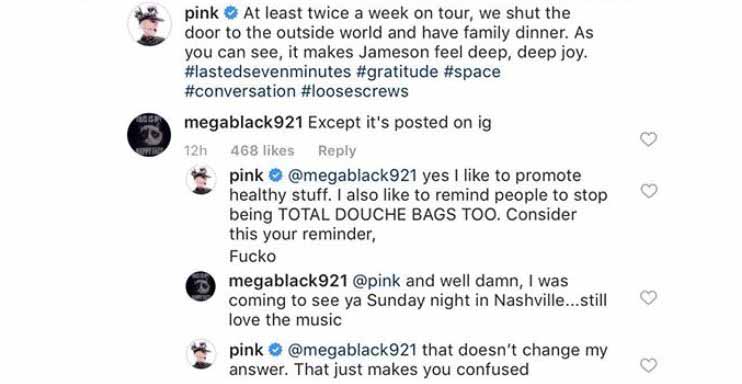 “Yes, I like to promote healthy stuff. I also like to remind people to stop being TOTAL DOUCHEBAGS TOO. Consider this your reminder, fucko.”

The commenter replied, “and well damn, I was coming to see ya Sunday night in Nashville…still, love the music.”

Pink replied, “that doesn’t change my answer. That just makes you confused.”

The commenter did not reply.