An Aussie mum was told not to pack homemade biscuits in her son’s lunchbox, unless she packs one for everyone in his class.

The uneaten biscuits were sent back to Joanne, along with a note:

“Dear Mummy, can you please avoid sending cookies unless there is one for everyone. It’s difficult for the other children when one has treats. Thank you.” 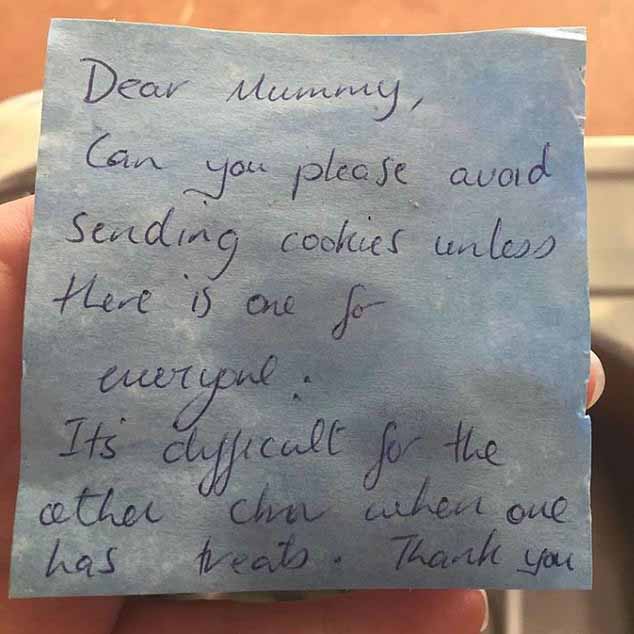 On Facebook, Joanne vented that despite being horrified, she “didn’t lose sleep over it”, deciding instead to chat to the teacher the following day.

She was then told by the teacher that there was a “policy that homemade goods aren’t encouraged unless there was enough to share with everyone.”

Joanne then asked the teacher if a packet of Tiny Teddies or Shapes would be OK.

“She said ‘that would be fine’, so I questioned how a homemade biscuit with four ingredients isn’t encouraged, but a processed packet supermarket option was okay?”

Joanne was told that as it was policy, she needed to take the issue up with the parent committee as they ran such policies.

While the incident happened in 2017, only recently posting it online, Joanne said that she kept the note on her office wall at home as “motivation” for her additive-free living business.

Of course, it still went viral.

Here’s some of the comments:

“That is madness! You are doing an amazing job at educating others. Keep going one family at a time and the ripple effect will catch up. Some are slow learners.”

“This is rough! I was asked to stop sending sultanas in my child’s lunchbox as it was deemed too unhealthy but packaged muesli bars, cakes and roll ups are fine. Sigh.”

“Surely he wouldn’t be able to share with everyone, what about the allergies issue?”

“This is absolutely ridiculous! How dare they shut down a parent supplying their child with decent food! As a teacher I am constantly battling the opposite way, I can’t imagine discouraging home baked goods. Keep fighting the good fight.”