Tiger Woods has suffered multiple leg injuries in a single-vehicle accident in the Los Angeles area and is undergoing surgery.

The full extent of Woods’ injuries was not immediately known, though authorities say they are not considered life-threatening.

Woods, the sole occupant in the SUV, had to be extricated from the vehicle with the “jaws of life” tools, the Los Angeles County Sheriff’s Department said in a statement.

He was conscious and talking to first responders, officials said.

Woods, 45, was taken to the hospital by ambulance.

This morning @LMTLASD responded to a roll-over collision in which @TigerWoods was injured. Please see our statement… pic.twitter.com/cSWOxKZC1w

“Tiger Woods was in a single-car accident this morning in California where he suffered multiple leg injuries,” his manager, Mark Steinberg, said.

“He is currently in surgery and we thank you for your privacy and support.” 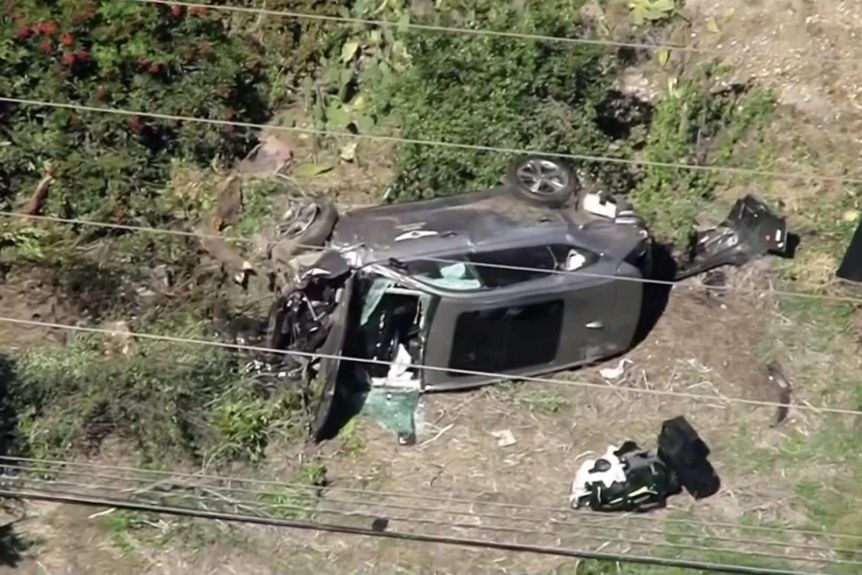 A KABC-TV helicopter over the scene of Woods’ accident showed an SUV on its side with the front end heavily damaged.

Airbags appeared to be deployed.

The wreckage appeared to be about 10 metres off the side of a road on a hillside.

The crash occurred shortly before 7.15am Tuesday, officials said.

News of the accident sent shockwaves through the sports world with Jack Nicklaus, whose record of 18 major titles has been one of Woods’ biggest goals, baseball star Alex Rodriguez and Wales soccer ace Gareth Bale among those to tweet their best wishes.

The PGA Tour issued a statement from Commissioner Jay Monahan. “We have been made aware of Tiger Woods’ car accident today,” it said.

“We are awaiting further information when he comes out of surgery. On behalf of the PGA TOUR and our players, Tiger is in our prayers and will have our full support as he recovers.”

Woods was in Los Angeles over the weekend as the tournament host of the Genesis Invitational at Riviera, where he presented the trophy.

He was to spend Monday and Tuesday filming with Discovery-owned GOLFTV, with whom he has an endorsement contract.

Woods, the 15-time major champion last played on December 20 in the PNC Championship with his 11-year-old son, Charlie.

He had a fifth surgery on his back, a microdiscectomy, two days before Christmas and gave no indication when he would return.

The Masters is April 8-11 and when asked if he would be there during the CBS telecast of the Genesis Invitational, Woods replied, “God, I hope so.”

This is the third time Woods has been involved in a motor vehicle investigation.

The most notorious was the early morning after Thanksgiving in 2009, when his SUV ran over a fire hydrant and hit a tree.

That was the start of shocking revelations that he had been cheating on his wife with multiple women.

Woods lost major corporate sponsorship, went to a rehabilitation clinic in Mississippi and did not return to golf for five months.

In May 2017, Florida police found him asleep behind the wheel of a car parked awkwardly on the side of the road.

He was arrested on a DUI charge and said later he had an unexpected reaction to prescription medicine his back pain.

Woods later pleaded guilty to reckless driving and checked into a clinic to get help with prescription medication and a sleep disorder.