‘The Simpsons’ is not just the longest running animated series ever – it’s also a straight up crystal ball and has continued its uncanny ability to predict our future.

You might remember that in an episode called “Bart to the Future”, the show predicted Donald Trump would run for office and that was made in the year 2000… 17 years before he became President.

Most recently however, the episode “Marge in Chains” from Season 4 appears to foreshadow the current state of 2020 and in particular the global coronavirus pandemic.

The episode – created way back in 1993 – features a scene where a factory worker in Japan coughs all over a blender that is being shipped to the US.

Upon its arrival in Springfield, the virus called the ‘Osaka Flu’ rips through the town. 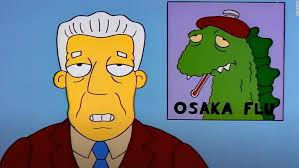 Although COVID-19 actually spread from Wuhan, China and not Japan, it’s still a bizarre coincidence and it gets weirder.

The people of Springfield tip over a truck they hope will contain the cure only to release a crate of “killer bees”, which strangely mirrors the sighting of Asian giant hornets in Washington state last week.

In response to another twitter user calling out the similarities, one of the episode’s writers, Bill Oakley confessed that “ok fine I guess we did” predict 2020.

There’s also an episode called ‘Million Dollar Maybe’, where Homer wins $1 million in the lottery, so hopefully that comes true for us as well!

'It's All Your Fault': Ricky Gervais Confirms Season 3 Of Netflix Hit 'After Life'

A Salty Spanish Masterchef Contestant Served An Untouched Dead Bird As A Message To The Judges.