Nickelodeon has officially given us a sneak-peek into a SpongeBob Squarepants spin-off show.

Uniquely, the cartoon will be set as a sitcom where Patrick hosts his own late-night talk show from his bedroom.

I guess you could say he will be the ‘star’ of the show (aha, very good).

From the image released by Nickelodeon, we get a look at Patrick’s parents, sister and grandpa. 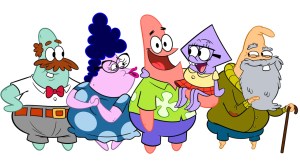 The show is set to be released in the US summer, so hopefully it will hit our screens in the Australian winter.

The Next Bachie Has Been Announced And - Finallllly - Some Diversity!

There's Gonna Be A Netflix Doco On The College Admissions Scandal

CONFIRMED: Schapelle Corby Is Joining 'Dancing With The Stars'