A family have been slammed over their ‘lack of respect’ after a photo was posted on social media showing the way in which they left a table after a meal at a restaurant.

The diners were shamed on Facebook after they left their napkins, food and menus all over the floor at a Colchester, UK restaurant.

A picture was posted to the Facebook group ‘Spotted: Colchester’ after an anonymous person was left horrified by the scene. 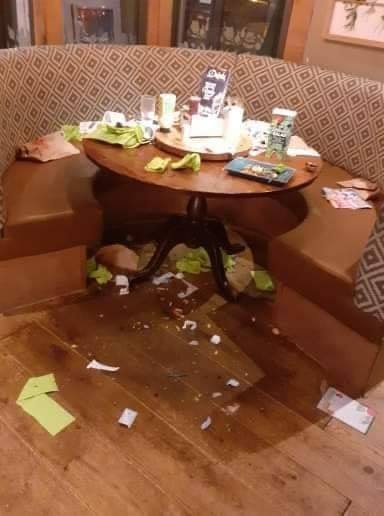 The post read: “I don’t care who you are, how often you get to go out to eat, how many kids you’ve got or how bad your day has been.

“It is NOT ok to go out to dinner and walk away from your table – leaving it in a state like this for somebody else to clear up.”

It went on to say “This is what happened in Harvester Colchester tonight. The poor young girl left with this disgusting mess didn’t know where to start.”The post has over 4,000 shares and 2,000 comments left by people who are annoyed by the messy diners.”

One said “This is disgusting!!” while another added: “Some people are just animals.”

Missed The Bunch with Clairsy & Lisa? Catch up by clicking play below!
Colchester Harvester UK