Hungry Jacks have announced they are releasing a ‘revolutionary’ new frozen soft drink.

They are called BURSTIES.

Customers will now be able to mix popping bubbles into their frozen favourites. 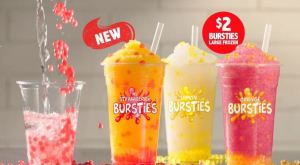 The drink will create a similar product to bubble tea and is using similar techniques found in in molecular gastronomy, the Bursties feature a gluten-free coating that encases juicy fruit flavour, releasing a burst of fruitiness in every pop!

They are being priced at $2, with the option to add extra Bursties for $1

Coles & Woolworths Roll Back The Clock As Surprise Products Make A Big Comeback!

When Two Become One: Sriracha Ketchup Is Now On Sale At Woolies!

Jase & PJ's Society's Sausage Is Up For Auction!