It’s incredible how often the internet gets itself into a yelling match over something like a simple photograph of a blue dress…or was that a gold dress?

Now, it’s over an avocado.

The photograph, shared by a shopper to a popular Aldi Facebook group appears at first to just be a normal photo of an avocado cut in half. 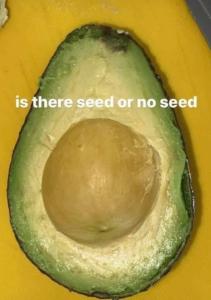 But the Aldi fans in the group have planted a seed of doubt in our heads and now we don’t know what to think.

“I thought no seed but now that I’ve seen it, I can’t unsee it,” said one member of the group.

Liana, who posted the photo was a no-seed convert, writing: “No seed, I can see avocado to the right that’s been damaged from seed removal and has ended up inside the hole.”

Although she later flip-flopped and is now pro-seed.

Either way, people are nowhere near agreeing and they’re getting very frustrated with the whole seed/no-seed palava.

“This is making me want to throw my phone at the wall! I cannot decide,” wrote one understandably fed up commenter.

They've Just Released Kombucha Lollies And I Mean, How 2021

Would You Eat A Vegemite Pizza? You Might Be Able To Get One From Domino's Soon

So, Lamington Pikelets Are a Thing & LAWD They Should Be An Entire Food Group