THERE’S so much I want to tell you, but I won’t ruin all the surprises life has in store for you.

Really soon, you’re going to face one of your first big, bad temptations. And I want to try and help you, so please put that cigarette down!!

You’ll think you’re so cool because all your friends are doing it, but trust me, this will become a lifelong addiction – one you’ll attempt to kick several times over with no success. I’m writing to you as a 45-year-old woman now and you won’t believe this, but you’re still smoking to this day. I know!!! How sad is that?

The silly thing is, you won’t even like that first, second or third cigarette, you’ll find it disgusting, but you’ll persist until you do like it and then it will be too late. So please, don’t be a dumbass, it’s way cooler not to smoke.

Another thing you should know is……YOU ARE NOT FAT!!! Every time you go out with friends you’ll tie a jumper around your waist to hide what you think is a big bum, but trust me, if I had the ass you have now, I’d be wearing Kylie’s gold hotpants everyday (you won’t understand that reference yet, but give it another decade). 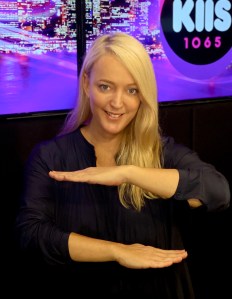 Over the next couple of years you’ll decide to leave school too.

You might feel a little lost and sometimes wonder whether you should have dropped out before year 12. But good news – you’re going to be fine!

I know radio is of no interest to you right now (apart from chasing down the odd thunderbird for a free can of coke), but eventually you’ll be hosting a national radio show and it will change your life.

You’ll meet your first husband there (yep, you’ll have more than one!) and you’ll also make a lifelong friend called Kyle who you are still working with to this day.

He is your soulmate, but not in the romantic way. He’ll finish your sentences for you, he’ll support you through so much and he’ll make you laugh every day.

Don’t be fooled though, this radio career won’t come easy – you’ll work your butt off at all hours (there are plenty of weekend shifts and 3am finishes coming your way), and the pay will be pretty average at the start. But even though you’ll only make $10,000 a year for a while, you’re going love every minute of it because you’re doing something you’re passionate about. And eventually, your hard work will pay off – trust me.

Your career will bring you so much happiness, but the greatest joy in life will come from having a child.

You’ll have a girl (sorry to ruin the surprise), but she’s now 9 years old and she is awesome.

She’s everything you ever hoped your child would be: she’s kind yet strong,  she loves animals, she’s extremely compassionate and she wouldn’t hurt a fly (but she packs some insane jiu jitsu moves – yep, by the age of 9 she’ll be able to bring a grown man down in a headlock if she needs to).

She will love you so much and you’ll love her even more – it’s a special bond that will sometimes make you cry at night. Get ready though, because having a child will wreak havoc with your hormones and you’ll become a different person, but one for the better, and you’ll get to experience an overwhelming love like no other.

Having your daughter will be a bit of a wakeup call about how you should be treating your own mum too. You’ll suddenly realise just how much she’s loved you for all these years, so try not to ignore her calls or texts (because you’re just so damn busy). You’ll regret that one day – when you get to my age, you’ll realise that it would break your heart if your baby girl did the same to you!

There’s so much more I want to tell you, but I think you’ve got this from here. Good luck kiddo, you’re going to be fine.”