Mums have complained of greedy Aldi shoppers after this week’s special buys sold out in seconds. 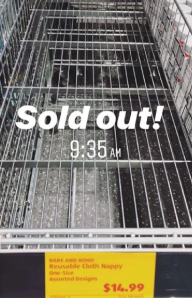 Within minutes, customers were complaining they hold sold out, with one woman taking to Facebook saying “one lady took off with every one of them”

“I called my Mum in Brisbane and was upset that I missed out and so did so many other mums, we all just watched her walk away with them,” she wrote.

The woman then said her “ruthless” mum went into her local Aldi store and “scooped up the lot”.

“(My mum) then handed them out evenly to all the mums who were there so no one missed out,” the woman wrote.

Another chimed in saying it was “crazy” at her local store.

“People were running, pushing, screaming,” she wrote on Facebook.

“I wasn’t after cloth nappies so I was just happy to stroll in and stand back while they all fought to the death.

“One lady even tried to steal some out of another ladies trolley. It was madness.”

Another commenter said they were at their local store just 15 minutes after it opened and “the guy said someone bought the lot.”

Bare and Boho have since said they had “massively underestimated the demand” and their “minds were blown by the interest”.

Well that escalated quickly! 😳. . We well and truly learnt a lesson today; Australians want cloth nappies, and y’all want them now! 🙌. . At opening the coms were coming in of stores selling out within minutes! 😳 And every store did receive allocations of stock, each of varied carton loads (despite not being nearly enough in hindsight! 😅). . We were quick smart on the phone. It didn’t take us long in to our collaborative chats, to acknowledge that we all massively underestimated the demand!. . Our minds were blown by the interest today!. . And we are not talking small numbers here…We are talking about bulk nappy stock & numerous shipments, that took our entire manufacturing facility team 3 months to get the volume we needed for this initial launch- and still not even touching the surface of the demand! 😳. . But between us, our manufacturing team and all the stores which received their stock- it was essentially a big trial round. A bit of the unknown!. . But we are absolutely delighted to say, we have some magic in the making! 🙌. . There IS going to be another drop! It won’t be for a few months as our team need to get cracking, production staff expansion, I’m sure you can imagine… But it’s happening! We are listening!. . Making cloth mainstream is the goal, and we are here for the long haul to get reusables in your hand! 🙌. . As for now though, we want to say we hear your frustrations, we acknowledge your disappointment, no feedback is being overlooked by the team. . We will be working hard to make the next campaign even greater! 😘. . For the online orders non-stop rolling in today, Thankyou for your patience!. . We have another shipment due in 2 weeks!. . For those wondering about what to do with their new nappies they so bravely faced the crowds to purchase?. . Well go ahead and give them a cuddle! Then give them a wash! 💦Then get practicing with the fit- that can take a few trials to find what suits your babe best. 👶. . But most of all have fun! Don’t overthink it, it’s a nappy after all (the most gorgeous nappy of your life) but it’s still a nappy! 😆.

Missed The Bunch with Clairsy & Lisa? Catch up by clicking play below!
Aldi Special Buys

The Secret Woolworths Supermarket Club That Could See You Getting Free Food!