The Fremantle Dockers have stood down Josh Carr from coaching duties after three breaches of WA’s quarantine laws.

It’s understood police had visited Carr’s home on Wednesday and he wasn’t there.

Ryan Daniels tweeted that the Dockers acted swiftly as the privilege given to the AFL clubs by state governments during the pandemic is “delicate”.

Daniels added that Carr also allegedly travelled to multiple locations not approved by the club. 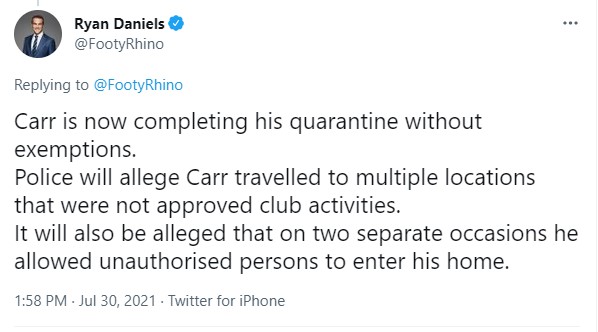 Meanwhile, a player, also with Fremantle, has been slapped with a $1000 fine for breaching home quarantine following their return from Queensland.

Brandon Walker, 18, self-reported the breach after he took his dog for a walk after a training session on Tuesday.

Joondalup Resort Indicates That Yeah Nah, It’s Not Booked Out By AFL In September