UPDATE: Saturday’s Geelong-West Coast AFL clash at Kardinia Park has been given the all-clear to go ahead as all Eagles players and staff had tested negative.

Metropolitan Perth and the Peel region will go into a three-day lockdown from midnight on Friday after a hotel quarantine outbreak led to community transmission.

Anzac Day dawn services have been cancelled and all people in the affected regions and we must now wear masks when leaving our homes.

Crowds will be allowed to attend Friday night’s NBL and Super Rugby fixtures in Perth but will be required to wear masks.

No crowds will be allowed at Saturday night’s AFL clash between Fremantle and North Melbourne at Optus Stadium.

Mr McGowan says the lockdown is necessary after two people spent several days in the community while infectious.

They include a 54-year-old man who stayed in the Mercure Hotel, the source of the outbreak, and completed quarantine on April 17 after arriving from China.

He spent his first night out of quarantine at the home of a friend, a Kardinya mother-of-two who has also tested positive.

Her children have tested negative. 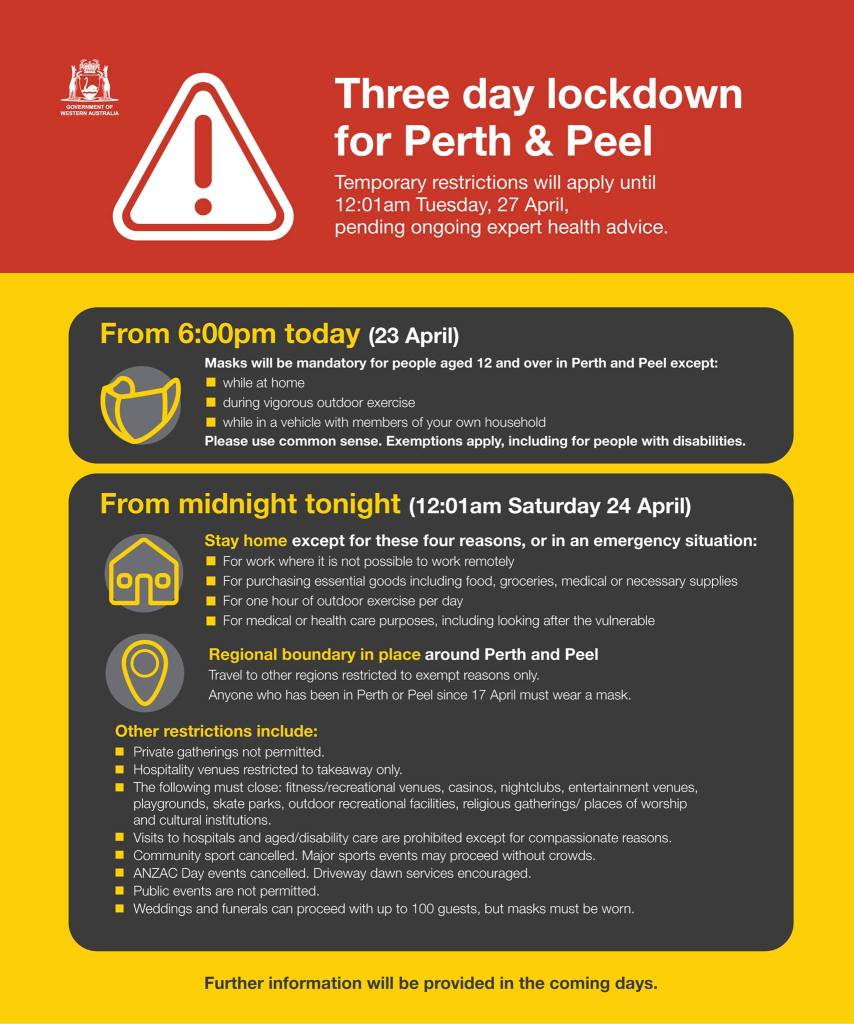 The man visited locations throughout the city, including popular tourist spot Kings Park, before leaving Perth on April 21.

Genomic testing has confirmed the virus initially spread in the corridors of the Mercure Hotel from a couple who had returned from India.

A pregnant mother and her four-year-old daughter who were staying across the corridor tested positive and remain in quarantine at the hotel.

The man who tested positive in Victoria had been staying in a room adjacent to the couple from India. Victorian authorities on Friday said he was asymptomatic.

Mr McGowan said he hoped the lockdown would not need to be extended.

“I know this is hard to take and I wish we didn’t need to be doing this,” Mr McGowan told reporters.

“But we can’t take any chances with the virus.”

People in the locked-down regions will only be allowed to leave their homes for four reasons: work if they are unable to do so from home, shopping for essential items, medical or healthcare needs or exercising for one hour per day.

Police Commissioner Chris Dawson said the midnight start time for the lockdown reflected the fact that it was the earliest time police could be deployed to vehicle checkpoints.

The man who tested positive after leaving the Mercure also spent four nights in short-stay accommodation at the University of Western Australia.

He flew to Melbourne on flight QF778 which departed on Wednesday carrying 257 passengers.

Victorian authorities are contact-tracing passengers and anyone who has returned to WA will be required to self-quarantine for 14 days.

NSW Health said it would commence screening of flights from Perth to identify any passengers who may have attended exposure sites in WA.

Queensland will require anyone who has been in Perth or Peel since April 17 to comply with the requirements of the WA lockdown.

Mr McGowan will seek to limit WA’s international arrivals to 512 a week for the next month.

Documents released by the government this week revealed the extent to which it was aware of risk factors at its quarantine hotels.

Chief Health Officer Andy Robertson received a report on April 8 which identified three hotels – the Mercure, the Sheraton Four Points and Novotel Langley – as being “high risk” for ventilation issues.

Dr Robertson wrote to the premier last Friday advising that the Mercure was the highest-risk of the three hotels and it should no longer accommodate returned travellers.

The mother, who is six months’ pregnant, and her daughter at the Mercure returned positive tests that day.

In his letter to the premier, Dr Robertson said the risks could be mitigated by changes including installing HEPA air filters in rooms with positive cases.

It was commissioned after a security guard at the Sheraton contracted COVID-19 in January, prompting a five-day lockdown.

Mr McGowan said the Mercure would no longer accommodate returned travellers and the government would review the continued use of the other high-risk hotels.

A plan to transition the Mercure to a “low-risk” quarantine hotel for seasonal workers will also be reviewed.

Hey Perth, Taco Bell Is Set To Open Not One But Two Stores!

There's A Fake 'Bunnings' Warehouse In The Philippines... And They Sell Booze

Cyclone Seroja Recovery To Cost Up To $200 Million: DFES