For the first time in 21 years, The Mustang Bar has avoided charging a cover. Until now.

The popular nightspot broke the news on Facebook that, from November 13, there’ll be a $10 cover charge for Friday and Saturday nights.

The Mustang said they had been looking forward for the state to move from Phase 4 to Phase 5, which was tentatively earmarked for October 24, where the 2sqm rule and the 50 per cent capacity for such venues would be scrapped.

However, due to health advice at the time, Phase 5 was delayed.

“Initially the delay was postponed due to the deteriorating circumstances in Victoria,” The Mustang said in a Facebook post.

“With the improved situation there, we were hopeful we could return to full capacity in the near future.”

Thing is, despite WA still being in Phase 4, selected venues that would predominantly hold seated events have since been made exempt from the 2sqm rule.

Regulars at The Mustang know that events aren’t ever seated.

While our attention is firmly on WA’s transition from the hard border to a controlled interstate border, a date for Phase 5 – and a return to full capacity for venues – remains to be determined.

This, along with Job Keeper no longer being available, The Mustang said they’ve had to make some difficult decisions to maintain their entertainment schedule and their business viable.

“We have avoided a cover charge for 21 years, except on occasion for international touring artists,” they added.

“However, with no prospect of getting from 50% capacity anytime soon we had few alternative options.”

So, let this be your PSA – if you’re heading out to The Stang from this Friday, be sure to bring an extra tenner with you. 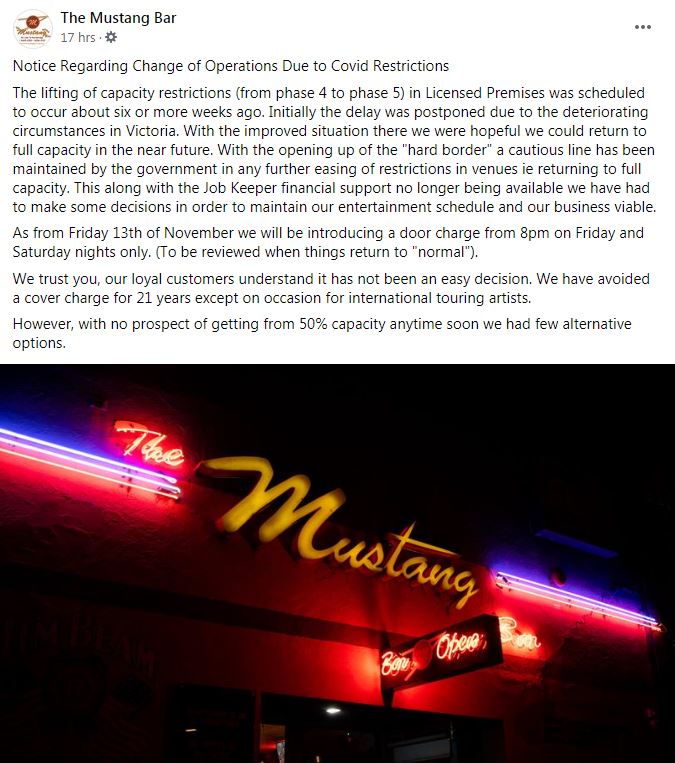 Missed The Bunch with Clairsy & Lisa? Catch up by clicking play below!
Perth

So, Will West Aussies Have To Wear Masks Or Not? McGowan Sets Us Straight

Um, There's Someone In WA Who's Won $2 Million And Doesn't Know It