I remember a couple of young women trotting along the Murray Street mall, shopping bags slung over their shoulders, chatting and laughing.

It was about 1995, and a loose crowd had begun to form between Myer, the City Arcade overpass and a high-end Aussie souvenir shop that sold Ken Done and Koala Blue merch.

While the crowd had seen this situation before, we couldn’t take our eyes off what was unfolding.

The young women walked past a service lane which was only really used for commercial drop-offs and rubbish trucks.

It was also used by a street performer on very high stilts. 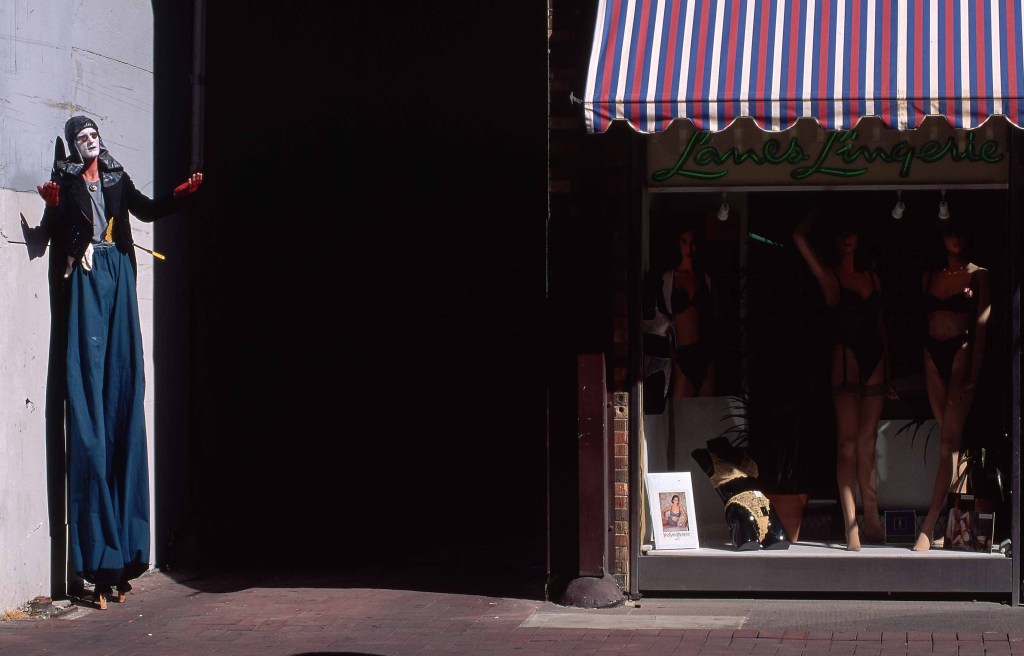 After they swept past, he silently hopped out of the lane’s afternoon shadow, mimicking their sassy gait, and flicking his imaginary hair.

The sudden laugh from the crowd gets the pair’s attention and they realise they had walked right into the Stilt Man’s theatre.

They kind of scream/laugh and wag their finger at him and keep walking on as the Stilt Man skulks back to the lane and skulk behind the (very tall) wall for his next inadvertent participant.

If there was a lull in the stream of people walking past (or if enough people had cottoned-on that he was there), Stilt Man would come out and do some ballet or not-so-subtley remind his audience that a few coins were appreciated – not by rolling out a busker’s hat or guitar case, but walking out one of those half-clam blue kiddy pools (handy for catching the contents of pockets from spectators an entire storey up).

While he took the act to a handful of spots around the traps, including Freo, Stilt Man was a Perth CBD favourite. 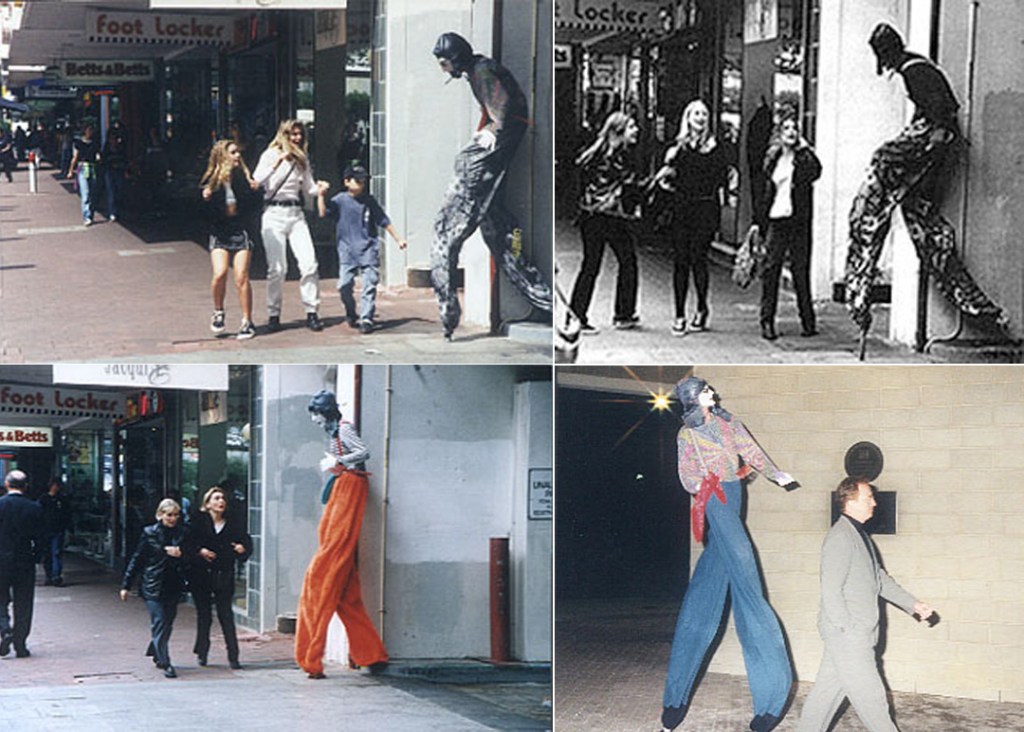 However, years later, I realised he wasn’t there anymore when I would suddenly remember him, particularly if I was traipsing across the Murray Street Mall – I would always give that service laneway a quick glance.

A few weeks ago, I stumbled across a Reddit thread about another familiar street performer, the late John Gill. 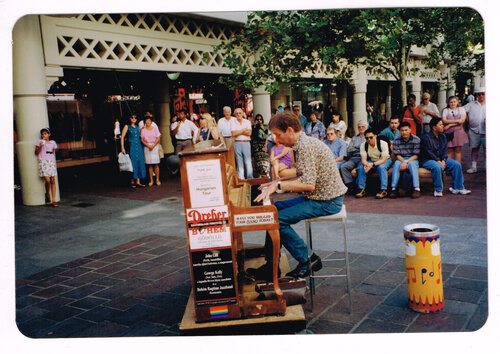 From 1993 through to 2011, John would crank out tunes on his upright piano, which had its front panel missing so you could see the little hammers hammering away. Many of the tunes he played were requests from the crowd, which John played completely by ear.

The photos I found online of him where taken in a very familiar spot.

I turned to a couple of colleagues and asked, ‘hey, do you guys remember Stilt Man?’

It didn’t matter if they did or didn’t, before they could answer I was already banging on about him as if he were my personal Ted Talk. It’s worth noting that I was also (badly) acting out his performance, you know, for full effect.

The thread on John Gill took me further down the Reddit rabbit hole where I came across a casual mention of Stilt Man.

Then, another day, another mention.

It wasn’t until I started to read a thread on the r/Perth subreddit on street theatre memories.

The OP (original poster) opened with, “Hey there. I was featured in this sub a week ago and it was suggested I share some more.”

He shared two stories from his days in Perth as Stilt Man, one on a couple of ‘regulars’ from around town who would interact with him during a performance. Another was an absolute rollicking yarn about Funky the Bear, or “the guy in the bear suit who got arrested at the Artrage festival”.

While you couldn’t see it, he had the other Redditors eating out of the palm of his hand.

“Oh man… floods of nostalgia and I am not one bit sentimental,” wrote one.

“Story telling ability: A++,” was another.

Without thinking, I then did something I’ve never done on Reddit.

I reached out to him.

His name is Martin Ewen.

Through our casual conversation, I found out Lurk was based off a street clown Martin had seen in Paris whose schtick was grumpy, sarcastic and very funny.

“I didn’t know you could do that,” he said. “At the time, I had a stilt dance piece, and my character was a little grumpy, but mainly confused because the music kept changing.”

The person behind the clown was a Portuguese trained pantomime and Martin would watch his show every day to try and deconstruct what he was doing.

But it was a seemingly unfortunate incident while Martin was working at a corner at the base of a six-storey apartment building that was actually pretty fortunate.

“Someone on the top floor got sick of the 3.5 minutes of repetitive music in my 5-minute show,” he recalled. “They dumped a huge bucket of water on me and drowned my sound system.”

So, without the music he’d been using for six years, Martin had to rethink his act.

“I escaped to London and started working in Covent Garden and Carnaby Street without music and focusing more on being observant and sardonic,” he said.

“It was almost immediately successful.”

While the European summer was the most lucrative for street performers, “there was always the option of cheating and getting into a metal egg and having another summer starting straight away.”

Back then, he said no so-called ‘internationals’ really came to Perth.

One time though, Martin (and Lurk) thought it was worth a… lurk.

“I was astonished at how well my grumpy comic sardonic unhappiness went down,” Martin said of Perth’s response.

“People were generally really grateful for the distraction, and the wide-open pedestrian spaces were the best in Australia to do shows in.”

“There were some home-grown shows just starting out that would do weekends and we all shared well and, of course, the world-renowned generous John Gill who was to me, a fellow seasoned pro.” 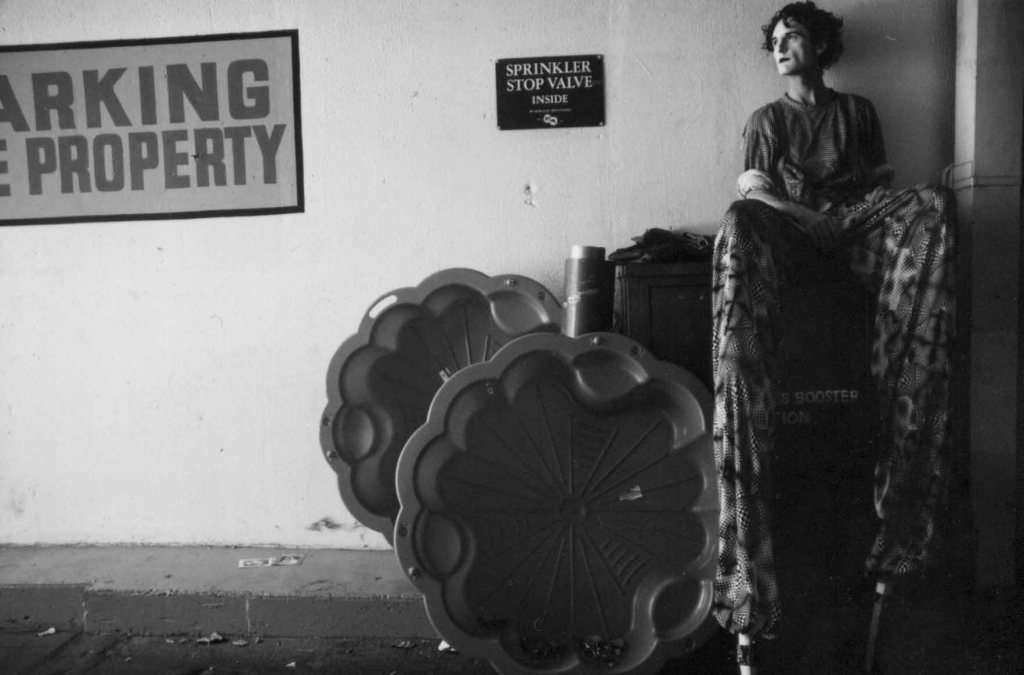 Not only were the general public welcoming, so was the Perth City Council.

“They were really helpful, encouraging and would defend me against the occasional person ringing in to ‘Tut tut’.” 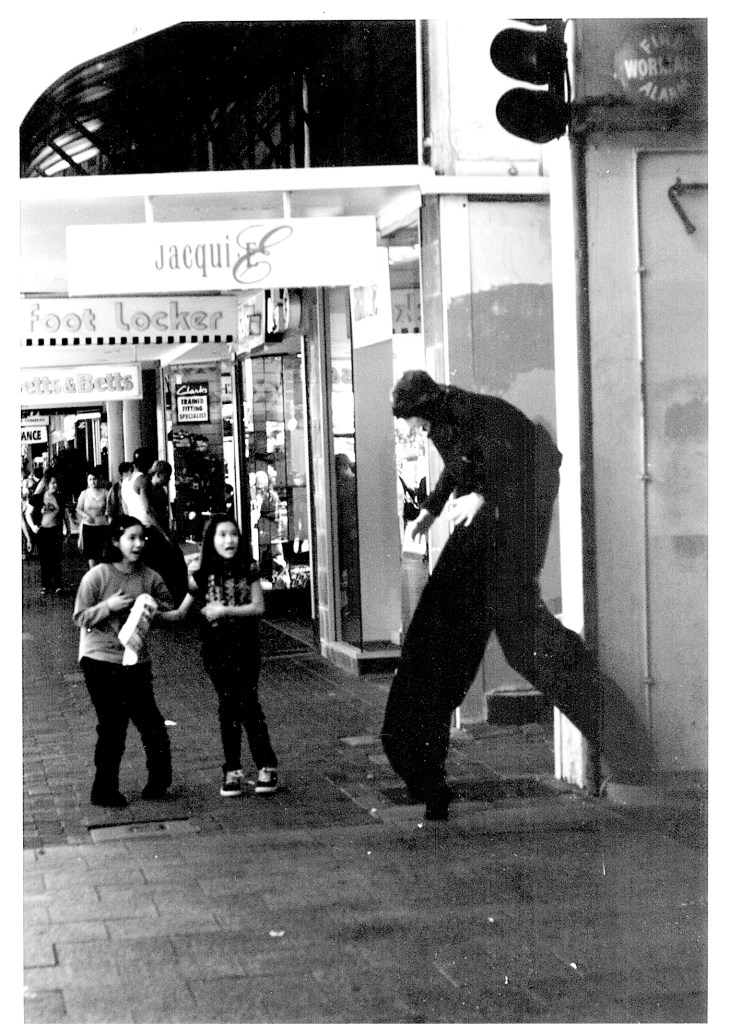 Martin said that Lurk would push the envelope from time to time, which is purely what happens when testing the boundaries.

But he also had rules.

“For example, if you made someone under five cry, you had to make them smile afterwards,” he explained. “That wasn’t always successful, but there were some rare kids I could make cry-laugh-cry-laugh -cry-laugh.”

Equally importantly, the local police thought he was funny.

“That was really important,” Martin said. “I’d play with them when they drove through my show and they were always happy to be part of it.” 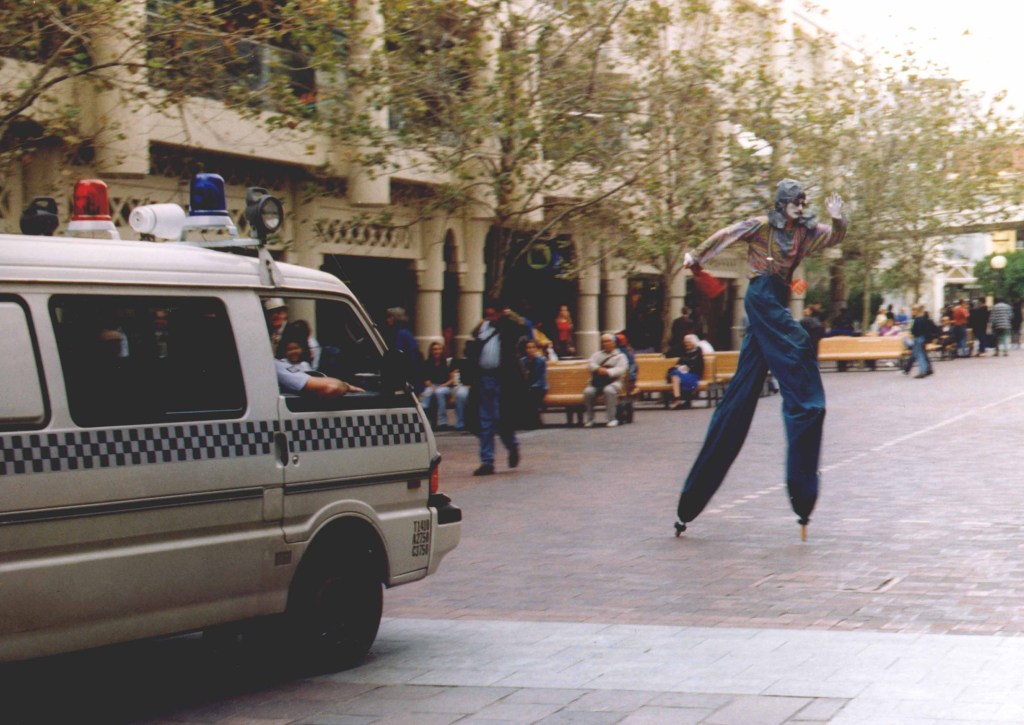 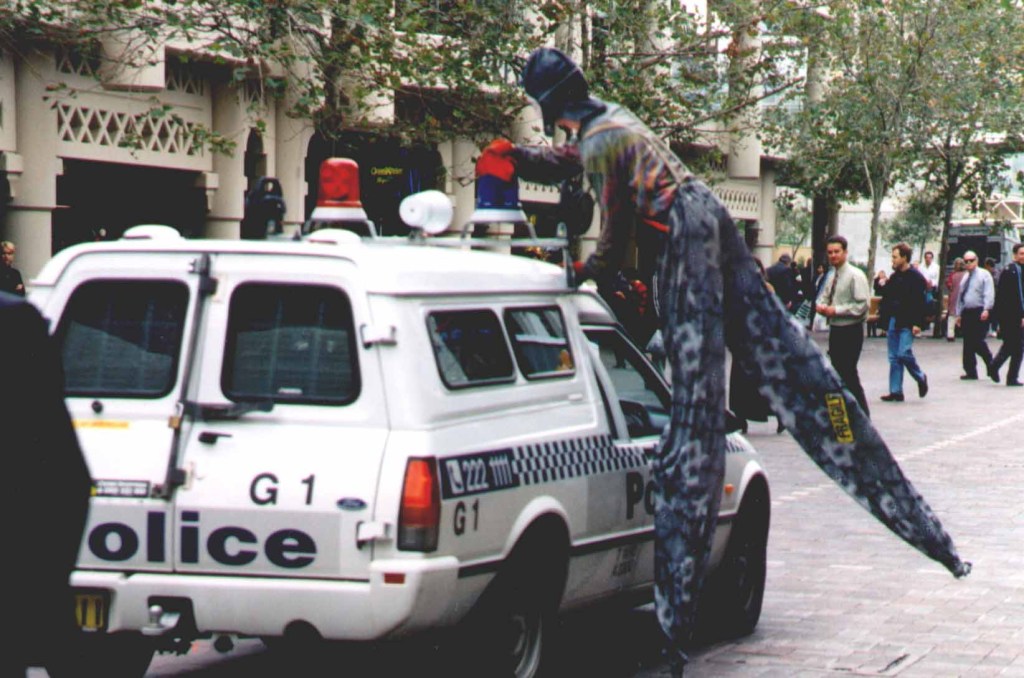 At the end of his first season, Martin decided to give Perth a shot as a permanent base. Mainly as Perth had taken to him so well (but also mainly as he had become smitten with a local Perth woman). 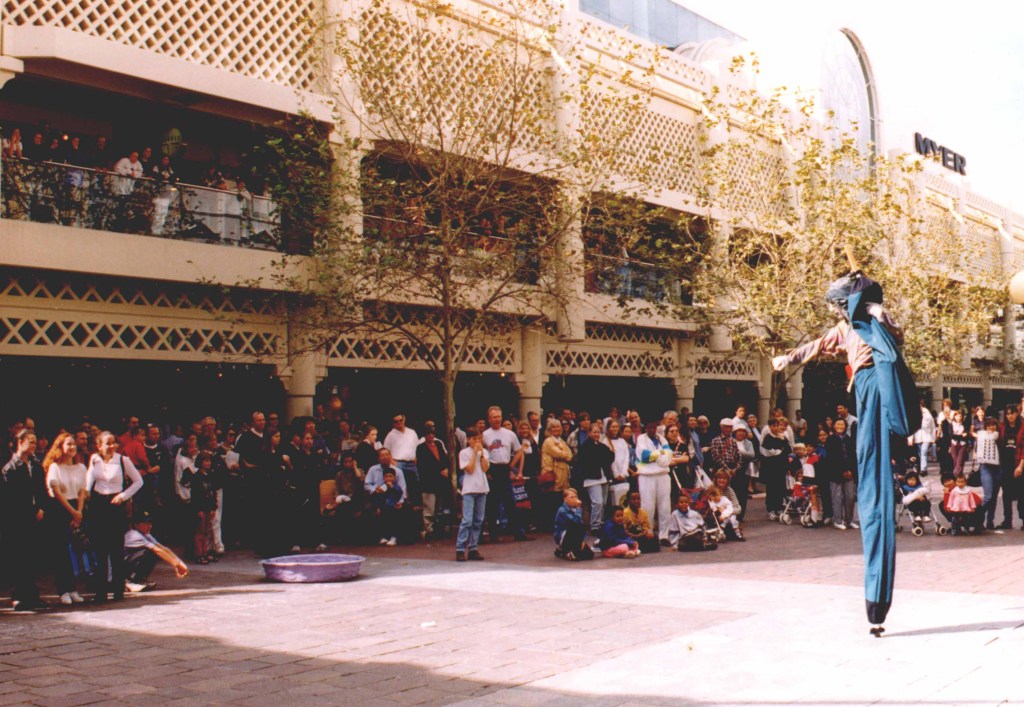 After Perth, Martin went back to the NZ before heading to the US and passing a Cirque du Soleil audition in New York as a potential clown principle.

It didn’t work out, but he said it wasn’t a big deal.

“I wanted to pass the audition more than I wanted to work for them,” he admitted.

Martin continued to work internationally and independently, mainly festivals and events before basing himself in Hawaii for about a decade. 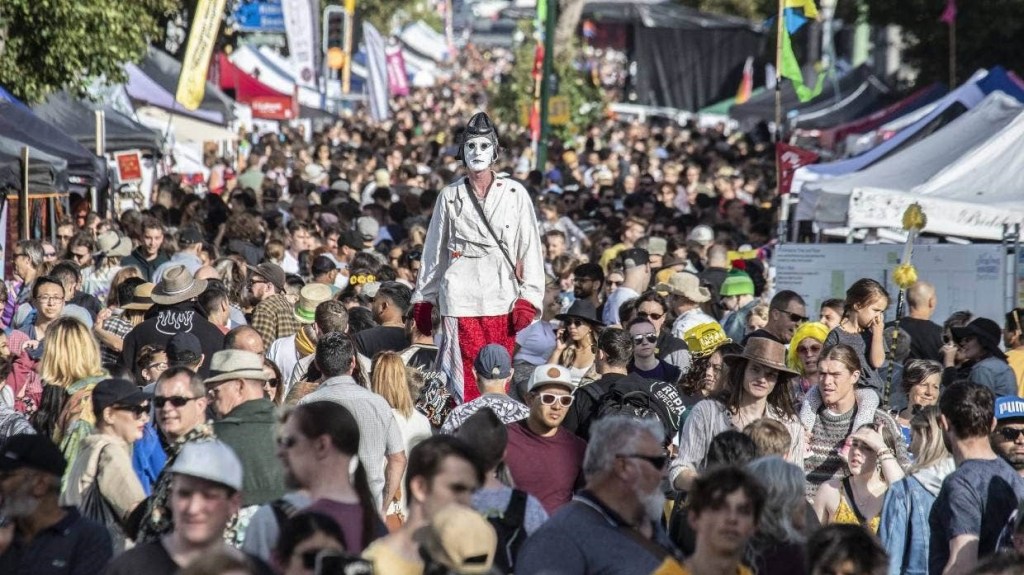 Then, three-and-a-bit years ago, Martin was diagnosed with terminal cancer and was given under a year to live, so he came home to New Zealand.

“Turns out I was misdiagnosed and, after an eight-and-a-half-hour operation and missing some bits, I’m now completely cured.”

“Funnily enough, not dying takes some getting used to, at least it did with me.”

Martin doesn’t perform much these days but, at 58, he’s still fully capable of stiltwork, which he says is quite unheard of, even more so when you consider Lurk clocks around 12ft tall.

“My knees are a finite resource and so I only perform ‘Lurk’ where and when I want to nowdays,” he said.

Which could be soon.

Martin is entertaining the thought of a Perth comeback.

“We’ll have to see what international travel allows in the coming year and if there’s any interest.

“I’m working on it. Perth Arts Festival hit me up!” 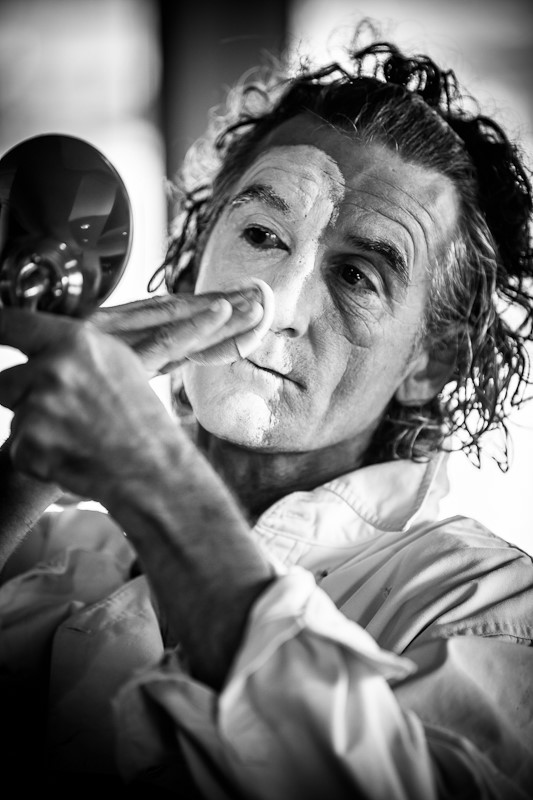 Baysie Bridge Hit (Again), That Makes It An Even 10 For The Year