Things got pretty heated at a Bunnings where a controversial Perth vegan activist zeroed-in on a sausage sizzle fundraiser for firefighters.

Tash Peterson, whose previous stunts include running onto the ground during the first AFLW derby at Optus Stadium. Her last protest, wearing ‘blood-spattered’ clothing and holding a pig’s head at a shopping centre led to a butcher clearing the counter to confront her. 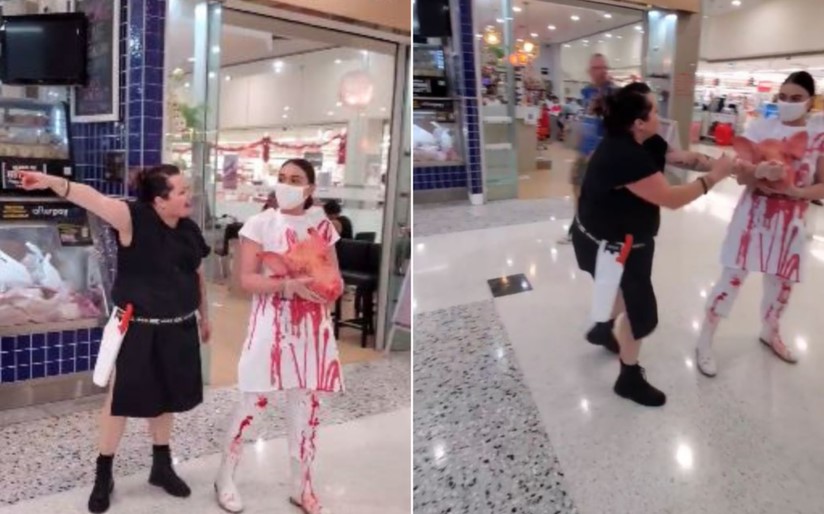 On Australia Day, it was Bunnings’ beloved sausie sizzle that copped Peterson’s wrath over animal agriculture and the environment.

This time, it was a member of the public who engaged in a war of words with Peterson to have more respect for the firies holding the fundraiser.

“They’re firefighters, you should have a little bit of respect,” the woman can be heard saying.

Peterson argued back, “The very reason they’re fighting fires is because of your consumption of animal products – that’s why there is mass fires happening.”

The woman began to walk away when she yelled “I wish they had bacon!” before heading into Bunnings.

A few moments later Peterson, carrying a blood spattered Australian flag, apologised to the firefighters, saying she didn’t mean to antagonise them and that she “respected the work they do.”

Howeverrrrr, she said she wanted them to “understand animal agriculture is the leading cause of climate change.”

As she walked away from the sausage sizzle, she added, “if you care about our nation you would be a vegan.”

Whoever Put On That Fireworks Display Last Night Remains A Mystery

Perth Fringe's Reuben Kaye: ‘The Most Beautiful Creature That’s Ever Been In This Studio’