A man accused of tearing the head off a kookaburra at a Perth pub in front of horrified children is yet to be charged but his lawyer says he has received death threats and has been forced to flee the country.

The man was at the Parkerville Tavern earlier this month when he allegedly grabbed Kevin – a cheeky kookaburra known for stealing food – and pulled the bird’s head off then threw it under the table.

“The bird should have been dealt with so it was not a menace to public safety,” the man’s lawyer told 6PR radio on Thursday. 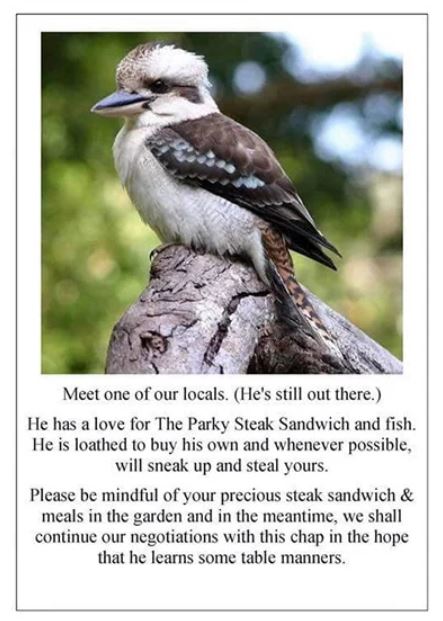 The lawyer said his client, who AAP has chosen not to name, had since been the victim of a “particularly vile and vicious” online vigilante campaign including threats to stalk, bash and kill him.

He said people had also threatened to rape his partner, prompting her to move out of her home, while the man had “left the country”.

Four violence restraining orders had been issued and more were likely, the lawyer said.

He called on the police to prosecute the vigilantes.

He would not comment on whether the man was responsible.

Earlier this week, Police Commissioner Chris Dawson said the man would not “escape without a very serious charge” over the bird’s death.

“I fully expect that the person who’s alleged to have done this will be charged and will be before the courts,” he told reporters.

Premier Mark McGowan said various authorities were seeking to take action and urged the man to “face the music”.

“I get the feeling it (Kevin) was much loved and quite a novelty for people visiting,” Mr McGowan told reporters.

“I thought the actions of the person involved were horrible and insensitive.

“Most people sitting in a beer garden where essentially a pet is killed in front of their eyes would think that’s the wrong thing to do.”

Mr McGowan labelled the man’s flight overseas “an odd response” and the lawyer’s suggestion Kevin was a pest “rather unusual”.