An out-of-control bushfire burning near the Perth Hills has engulfed at least three homes and is threatening more, with locals in a large swathe of the region told it is too late to leave.

The 4000 hectare blaze has raged through the night near the town of Wooroloo, with the shires of Mundaring, Chittering, Northam, and the City of Swan impacted.

Western Australia’s Department of Fire and Emergency Services has updated its emergency warning for the blaze, expanding the affected area ahead of another day of hot weather. 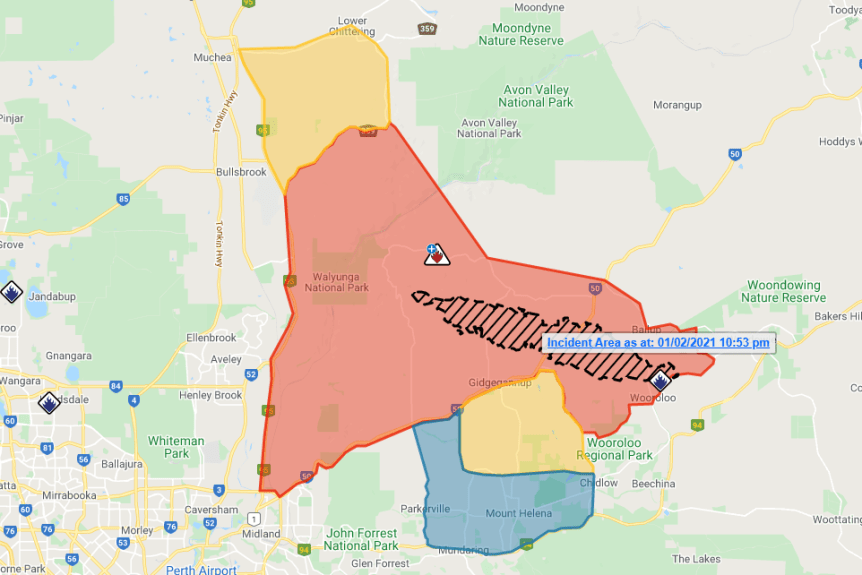 A region stretching west from Wooroloo to the Walyunga National Park has been told it is too late to leave.

“You must shelter before the fire arrives, as the extreme heat will kill you well before the flames reach you,” the warning issued on Tuesday morning said.

Meanwhile, surrounding areas including Brigadoon, Aveley, Ellenbrook and The Vines have been told to leave if they are not prepared to fight the blaze.

The bushfire is unpredictable and weather conditions are rapidly changing, the warning said, urging people to stay vigilant.

The fire reportedly claimed at least three homes on Monday night, and was burning close to other properties.

DFES Superintendent Peter Sutton said the number of homes lost is likely to be higher.

“We’ve experienced erratic fire behaviour overnight, which has made it very hard, near on impossible in fact, for firefighters to suppress this fire,” he told the ABC.

“Firefighters have been working overnight to save lives and property.

“We’ve had a number of properties impacted, but unfortunately we won’t be able to know the extent of the damage until our rapid damage assessment teams can actually go around the fire area this morning.”

An evacuation centre has been set up at Brown Park Recreation Complex on Amherst Road in Swan View.

Wooroloo falls into the Perth Metropolitan area which is subject to a five-day lockdown due to a COVID-19 community outbreak.

DFES said anyone forced to leave their homes should wear a mask and continue to follow precautions, including maintaining appropriate physical distancing.

All pictures via ABC News