Quaynor was left with a 15-20cm gash in his right shin after tackling Wicks during the Magpies-Swans clash on Thursday night.

It was the Pies’ belief that Wicks’ metal studs caused the damage when they raked down the front of Quaynor’s leg as the players fell to the ground. 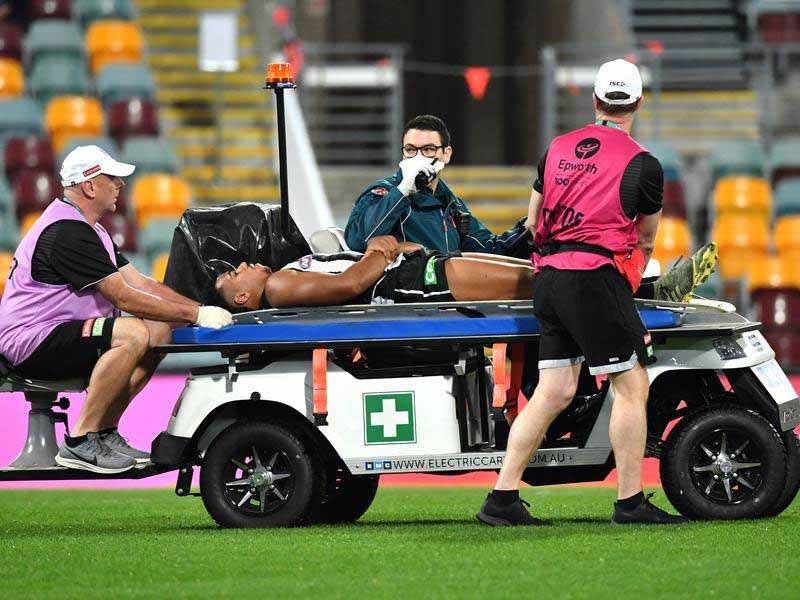 On Friday, the Swans issued a statement clarifying Wicks was wearing boots that have “a hybrid soleplate which includes plastic and aluminium stops”.

However, they argued it was unclear which part of Wicks’ boot made contact with Quaynor’s leg in the “freak accident”.

“These boots are understood to be widely worn by players across the competition,” the Swans’ statement read.

“Following discussions with the AFL it has become clear that these boots are not compliant with AFL regulations.

“The Sydney Swans will take steps to rectify this immediately to ensure that all boots are compliant going forward.

“The club has been in contact with Collingwood to express its regret for the incident and concern for Isaac, whom we wish a speedy recovery.”

After investigating the incident, the AFL on Friday wrote to all 18 clubs to reinforce the competition’s rules surrounding players’ footwear.

“The health and safety of everyone in our game, both on and off the field, is always our highest priority,” Hocking said.

“Football boots with exposed metal studs have the potential to cause injuries and have no place across any level of our game.

“There are players in the competition who have been wearing boots direct from manufacturers that feature screw-in studs that have a hybrid soleplate, which includes both plastic and aluminium stops, and these are not compliant with AFL Regulations.

“It is the responsibility of clubs and players to work with manufacturers to ensure football boots worn by all players are compliant with AFL Regulations and ensure a duty of care to themselves, their teammates and opposition players.

“Where we can make our game safer for everyone involved, we will.”

Collingwood coach Nathan Buckley, who has spent almost three decades in the AFL system, said the damage to Quaynor was unlike anything he’d ever seen.

“His studs sort of raked across his shin,” Buckley said post-game, saying it “split his shin six or eight inches completely open.”

“The kid [Wicks] could have had metals studs in as well, so that was his [Quaynor’s] bad luck, to tackle the only kid that had that.

“Studs pierce the skin periodically … but you would never see what happened to Isaac in that last quarter ever.”

Buckley said Quaynor would be sidelined for at least two weeks, and possibly longer.

The AFL Grand Final Will Be In Queensland: Here’s The Unofficial Proof

What AFL WAGs Did To 'Breach COVID Protocols' In Queensland