Starting the year as premiership fancies, West Coast and Richmond find themselves in a scrap for survival ahead of their Thursday night showdown at Metricon Stadium.

The Eagles’ quarantine hub struggles continued on Saturday when a poor third-quarter display cost them dearly on the way to a 48-point loss to Port Adelaide.

It left West Coast with a 1-3 record and the second-worst percentage in the competition (68.8).

Richmond, with a win and a draw to their name, are faring only marginally better.

The defending premiers are languishing in 14th spot on the table with a percentage of 87.9.

Richmond’s 32-point loss to Hawthorn in round three was followed by a shock 26-point defeat on Saturday to St Kilda, despite the return of Dusty Martin.

With the regular season shortened to 17 rounds, West Coast and Richmond have little room for error from this point, making Thursday night’s clash a high-stakes affair.

Geelong (2-2) shot up to fifth spot on the ladder after overcoming a late scare to beat Melbourne by three points.

The Demons booted the last two goals of the match to give themselves a chance of snatching victory, but Adam Tomlinson’s late set shot from 50m out narrowly missed.

Geelong’s 7.5 (47) to 6.8 (44) win came at a big cost after star defender Tom Stewart suffered a suspected broken collarbone in the first quarter.

Gold Coast are shaping up as this year’s fairytale story, and first-year midfielder Matt Rowell is looming as a shock contender for the Brownlow medal.

The Suns posted their third win on the trot with a 13-point triumph over Fremantle.

Gold Coast had lost 19 straight games before this successful run, and they have won over the hearts of fans this year with their hot form and dazzling displays.

Rowell might already have nine Brownlow votes in his pocket after tallying 20 disposals, seven clearances, and two goals against the Dockers.

One of his Brownlow rivals – two-time winner Nat Fyfe – injured his hamstring and the Fremantle skipper is awaiting the results of scans. 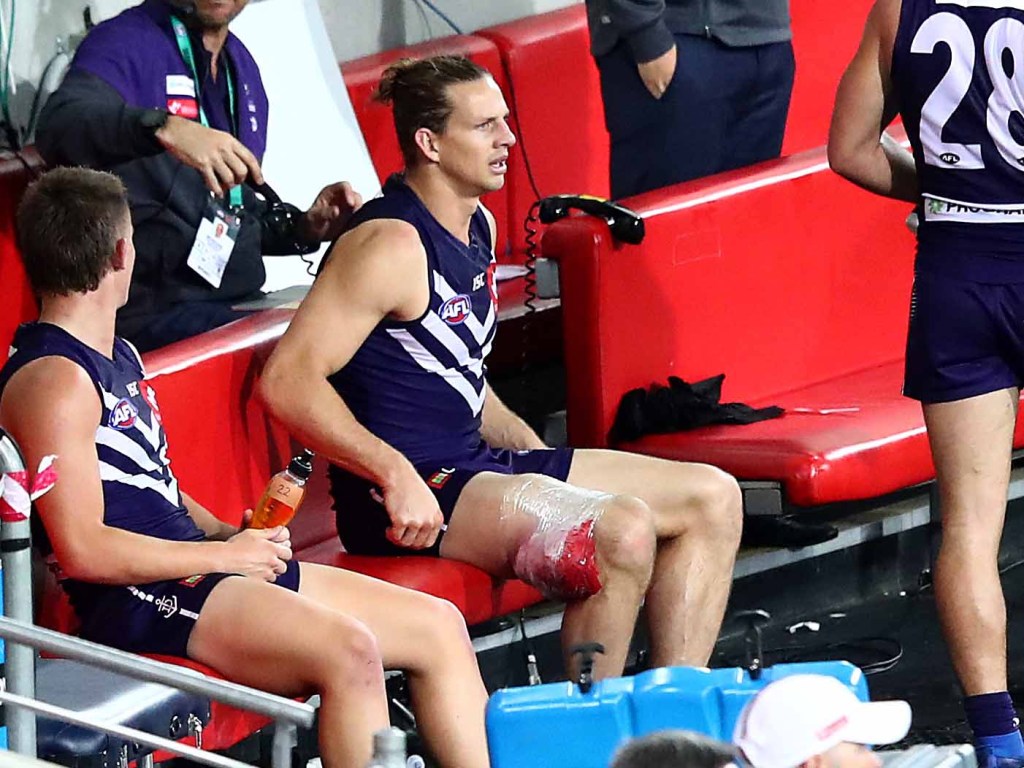 Port Adelaide are the early pacesetters after posting four-straight wins, while Brisbane have moved up to third spot with Sunday’s 37-point win over Adelaide.

Brisbane host Port at the Gabba on Saturday night in a top-four blockbuster.

Adelaide and Fremantle are both winless after four rounds, but the Dockers’ form has been far more encouraging than that of the Crows.

WHAT HAPPENED IN ROUND 4:

* THEY SAID IT: “There’s nothing you can say (to him). Nothing you can say. You just have to be there sometimes … he’s had a terrible run, in a number of ways. We need to look after him,” John Longmire was shattered to learn Sam Naismith, who missed the past two seasons because of a knee injury and recently lost his sister to cancer, needed another knee reconstruction

* MAN OF THE ROUND: Charlie Dixon’s six-goal haul was built on brawn but relied on finesse off the boot. The Port big man kicked straight and made a mess of the Eagles’ defence whenever the ball was directed his way

* KEY MOMENT: Jacob Townsend’s long set shot to win it for Essendon with seconds left at the MCG appeared to be touched just before it reached Liam Jones on the goal line. But the Blues’ defender removed any doubt when he somehow managed to get his face in the way, the ball bouncing off his head through for a precious rushed behind

* TALKING POINT: Are West Coast shot? At 1-3, West Coast’s season is hanging in the balance. Their percentage of 68.8 is the second worst in the league, and they look stripped of confidence. The only upside is they have just two more games in their Gold Coast hub before returning home for a golden run of games in Perth

* TRIBUNAL WATCH: Essendon’s Zach Merrett was handed a one-match ban for his swinging punch which sent Jack Silvagni to hospital with a fractured rib and a bruised lung. West Coast veteran Will Schofield copped the same penalty for headbutting Port Adelaide’s Zak Butters. Five players were fined for the Saturday night melee between Gold Coast and Fremantle

WHAT’S NEXT: Richmond and West Coast were due to face-off at Metricon Stadium on Thursday but that’s now in jeopardy over coronavirus fears. Collingwood and Essendon will aim to bounce back to the winners’ list on Friday night when they lock horns, while Gold Coast’s fairytale run will be given a stern test at Geelong’s home fortress. Unbeaten Port Adelaide will take on Brisbane at the Gabba in a top-four battle.

'Come At Me Baby': McGuire Tells McGowan To Pony Up If He Wants AFL Grand Final In Perth

‘We Need To Get Home’: WA AFL Coaches Call For Hub End Date