Josh Kennedy has nailed a snap from the boundary line with 40 seconds remaining to lift West Coast to a pulsating four-point win over Richmond in front of 50,834 fans at Optus Stadium.

The Tigers looked set for victory after opening up a 22-point lead midway through the final quarter of Sunday’s AFL match. 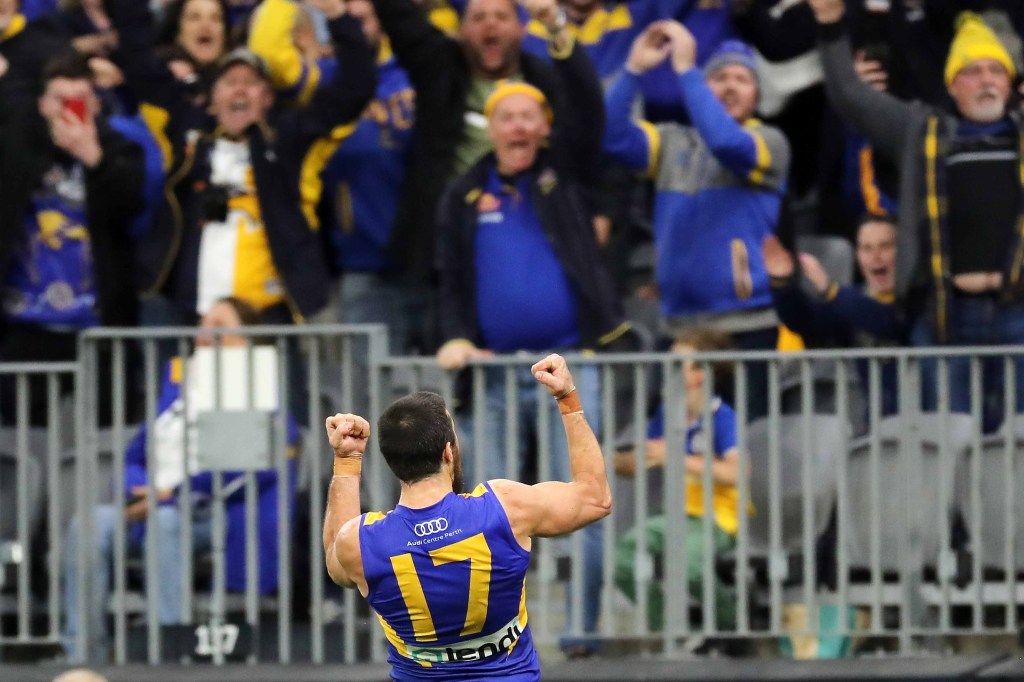 But West Coast launched a frenetic fightback in the final 10 minutes of the clash, with goals to Jake Waterman, Jamie Cripps, and Oscar Allen closing the margin to two points with four minutes to go.

Both sides threw everything at the contest in the final stages of the gripping match.

With 90 seconds remaining, Eagles captain Shannon Hurn had the ball on his goal-line.

In scenes reminiscent of West Coast’s 2018 grand final triumph over Collingwood, the Eagles rolled the dice and worked their way forward, with Liam Ryan running onto a loose ball before drilling a low pass to Kennedy 35m out from goal.

There was some debate as to whether the pass travelled the necessary 15 metres.

Kennedy, who was best on ground, calmly nailed the snap from the boundary to give West Coast the lead.

Richmond star Dustin Martin had a chance to win the match with 10 seconds remaining when he unleashed a shot from 55m while on the run and under pressure.

But the kick didn’t have enough legs in it, with Hurn marking just metres from goal to secure the victory.

“It probably summed up our night really. We just didn’t make the most of our chances, and they did.”

Kennedy finished with four goals in a standout display, while ruckman Nic Naitanui was influential with 20 disposals, 31 hitouts, five clearances and a goal.

“When he’s fresh, he’s good. He might need a week off every second week,” Eagles coach Adam Simpson said with a smile about the returning Kennedy.

“And that goal – who else would you rather have a shot for goal like that? Maybe Dom (Sheed).

“But I think JK’s ability to ice the game like that was very special.”

In the spirit of footy, our property manager Ted Roberts is heading to the Richmond rooms.

The Tigers’ property truck has broken down, so Ted will give them a hand and drive their equipment to the Airport.

Martin tallied 23 disposals, six clearances and two goals, while Shai Bolton (23 disposals, one goal) was crucial in setting up what looked to be a match-winning lead for the Tigers.

Naitanui was a force to be reckoned with in the opening term, tallying eight disposals, four clearances, and a spectacular snapped goal from the boundary to give his side a four-point lead.

Kennedy kicked truly with his two set shots, while at the other end Bolton missed two gettable shots – including one snap that went out on the full when a teammate was free near the goalsquare.

Richmond threatened to tear the game open with a four-goal burst during the second quarter, and they pulled clear again in the final term off the back of Bolton’s brilliance.

But there was another twist to come, with Waterman’s booming goal kick-starting a run of four straight majors that saw West Coast snatch victory.

Missed The Bunch with Clairsy & Lisa? Catch up by clicking play below!
AFL josh kennedy the bunch West Coast Eagles

Nathan Buckley Set To Step Down As Magpies Coach

'It's What's Happening Now That Matters': An AFL Grand Final In Perth Is Within Reach

'He Was Out Of It': Elliot Yeo's Changeroom Chat With Oscar Allen After Sickening Concussion