Tim Kelly sizzled against his former club but it was Nic Naitanui who shone the brightest to help West Coast post a nine-point comeback nailbiter against Geelong at Optus Stadium.

Spearhead Josh Kennedy booted two vital goals in the pulsating final quarter to finish with four for the match, while Kelly tallied 23 disposals and five clearances in his first match against the Cats since leaving at the end of last year.

Dom Sheed was also exceptional with two goals and six clearances from his 24 disposals.

But it was Naitanui who had the biggest influence on the match, despite tallying just nine disposals and failing to take a mark.

A significant portion of Naitanui’s 34 hit-outs fell in the lap of his midfield troops, leading to several crucial goals.

His bullocking work at ground level was also vital in helping turn the midfield battle West Coast’s way in the second half.

“Nic was special. His form all year has been first class,” Eagles coach Adam Simpson said.

“He’s gotten better every week. He delivered tonight but he’s been delivering for a long time.”

“I thought our guys with some difficulties really stood up,” Geelong coach Chris Scott said.

“It’s always bitterly disappointing when you lose a game like that, but I think in the fullness of time we’ll come away more positive than negative around our performance.” 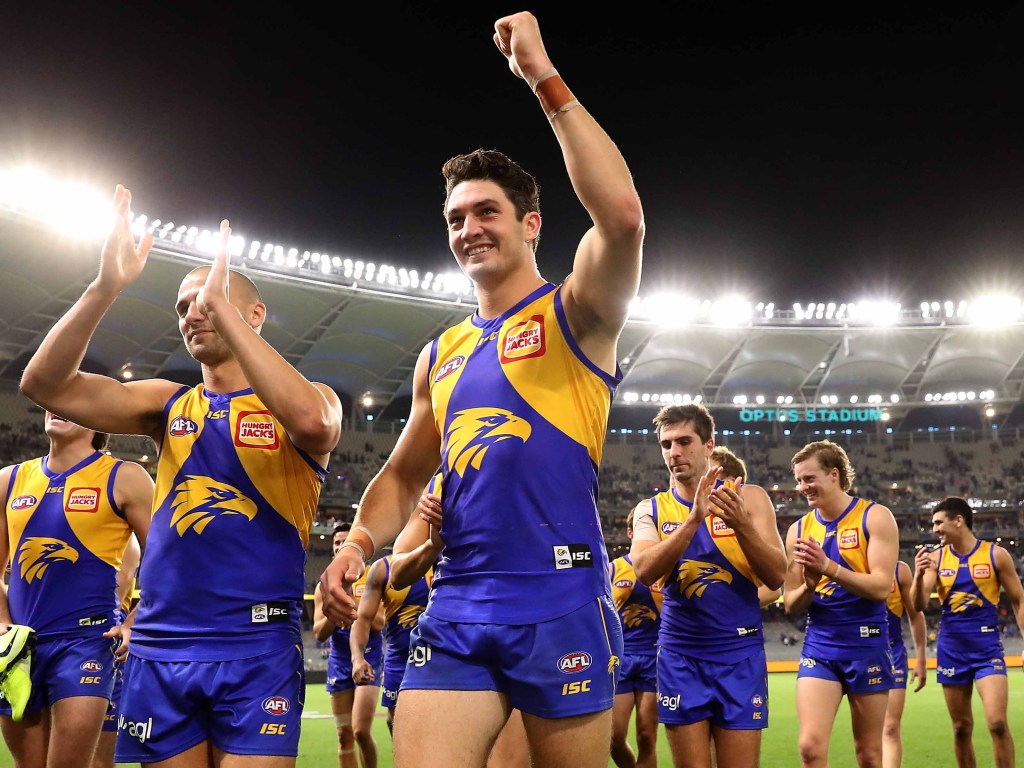 The result moves West Coast into fourth spot with a 6-3 record, while Geelong (5-4) are sixth.

West Coast booted the first goal of the match within 12 seconds courtesy of a great ruck tap from Naitanui and a mark from Kennedy in the square.

The Cats threatened to break away in the second term as the lead grew to 22 points, but a late goal to Sheed ensured the damage wasn’t too great.

Geelong were forced to defend grimly for long periods of the second half as West Coast launched wave after wave of attack.

The Cats were clinging to a two-point lead early in the final quarter when the goal review system took centre stage.

Geelong’s Sam Simpson celebrated a goal despite his kick coming off his knee.

Replays were inconclusive as to whether the ball touched his boot after coming off his knee, meaning the goal umpire’s original decision of a goal stood.

A centimetre-perfect Naitanui ruck tap a short time later helped Kennedy score his third goal, and the Eagles were in front when Jack Darling kicked truly at the 12-minute mark.

The sealer didn’t come until the final minute when Kennedy kicked his fourth.

The AFL Grand Final Will Be In Queensland: Here’s The Unofficial Proof

What AFL WAGs Did To 'Breach COVID Protocols' In Queensland