A Melbourne bar owner and his financial planner friend have each been jailed for at least three months for breaching Western Australia’s border rules so they could attend the AFL Grand Final.

They each pleaded guilty to three counts of failing to comply with a direction and one count of gaining benefit by fraud.

The court heard the pair had arrived in Perth on September 22, having been granted approval to enter based on G2G travel pass applications which indicated they had each been in the Northern Territory for the previous 14 days.

It was later determined they had flown from Melbourne to Darwin only eight days earlier and were therefore “high-risk” travellers who were not permitted to enter WA under its controlled border regime.

The pair attended the grand final at Optus Stadium on September 25 and were pictured posing inside the change rooms with Melbourne player Alex Neal-Bullen after the side’s drought-breaking premiership win. 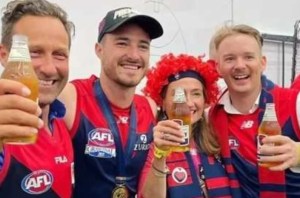 They were arrested at a resort in Bunker Bay in the state’s southwest on September 28 after police issued a public appeal for information.

Both tested negative to COVID-19.

Defence lawyer Seamus Rafferty, acting for Babbage, accepted the offending was serious but urged the court to impose a suspended prison sentence.

He told the court his client, a first-time offender, was “deeply remorseful”.

“People became excited in relation to who was participating in the grand final, particularly one team that has been starved of success for a very long time,” he said.

“It is unthinking, it is callous to some degree because we all know we’re in a pandemic. It’s the old ‘she’ll be right’ … that’s really the thought process.”

Mr Rafferty said Babbage had travelled from Mt Hotham, which was not subject at the time to a stay-at-home order, and was fully vaccinated.

A police prosecutor argued the offending was serious enough to justify an immediate term of imprisonment, saying there could have been a “super-spreader” event at a grand final attended by more than 61,000 fans.

Magistrate Matthew Holgate sentenced the men to 10 months’ imprisonment but ordered that seven months be suspended.

It means the pair will each serve three months in prison and spend Christmas behind bars.

Three other people have also been accused of wrongly entering WA to attend the game. Their court charges are pending.

Failing to comply with an emergency direction carries a maximum sentence of 12 months imprisonment or a $50,000 fine.

Babbage and Burbank are also facing charges in the NT.