Collingwood coach Nathan Buckley received front row tickets to see the ‘West Coast Globetrotters’ for his 48th birthday on Sunday – but the only problem was it was his side who copped the punishment.

Buckley declared his side showed a rare soft underbelly in their 66-point loss to the Eagles at Optus Stadium. 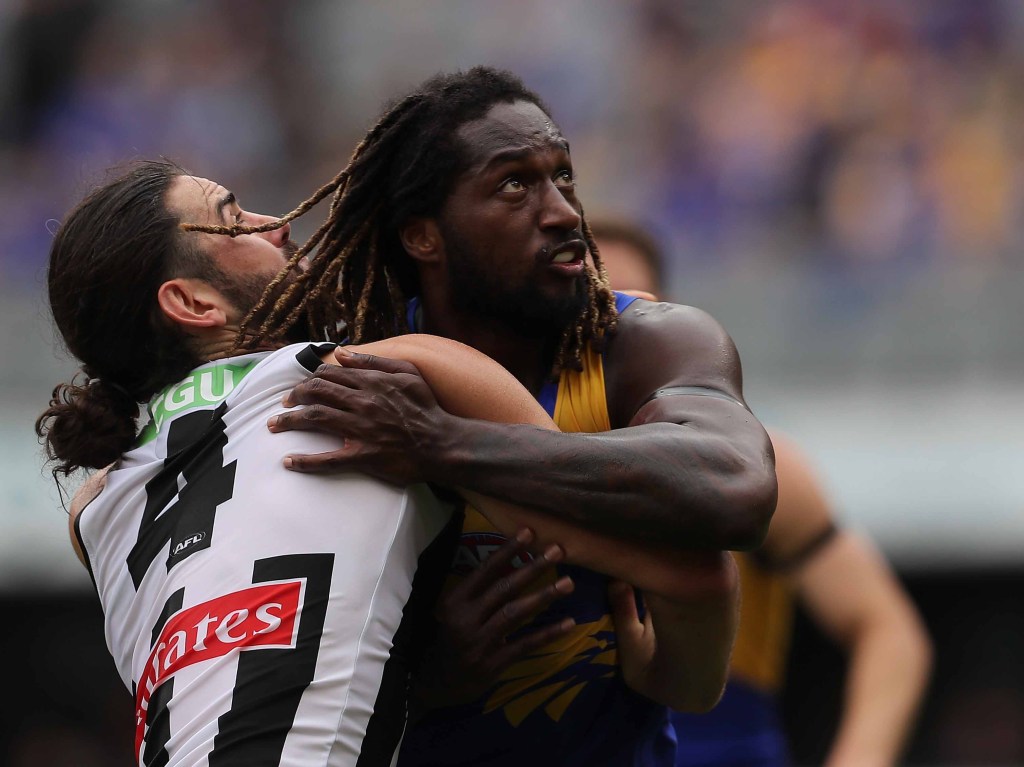 Tim Kelly (30 disposals, six clearances, one goal) shone through the midfield in his best game for the Eagles. 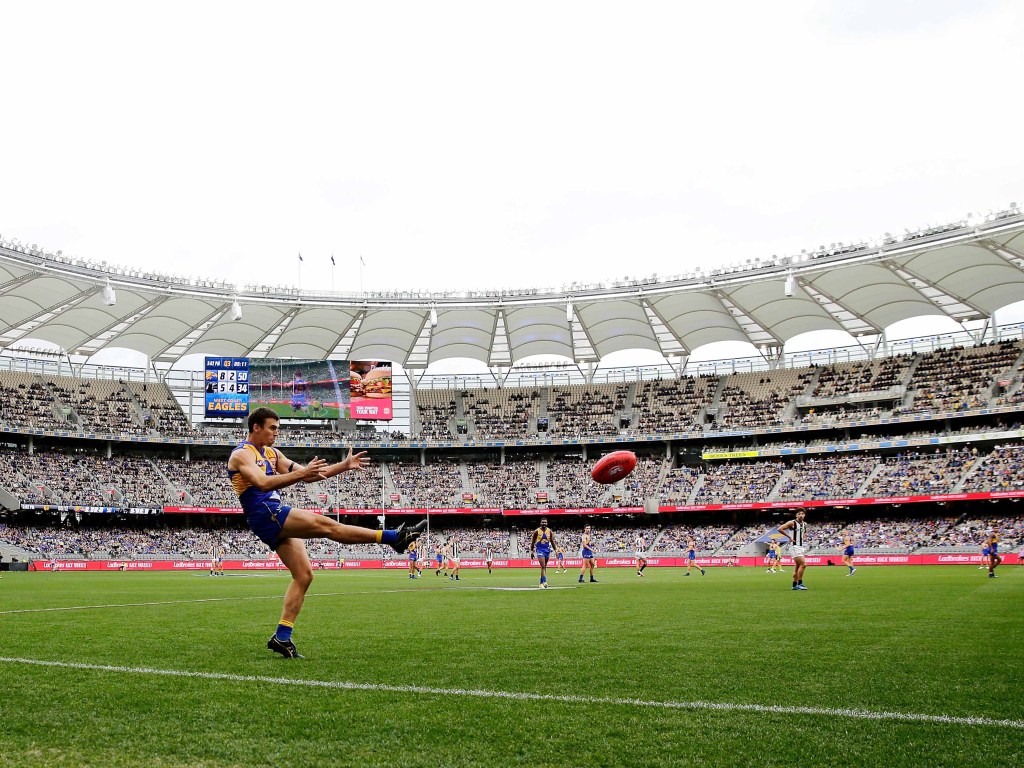 The Magpies boasted the best defensive record heading into this round, conceding an average of just 42.6 points per game.

But they were hopelessly outclassed against a rampant Eagles outfit who moved into premiership favouritism.

“I commented in the box, we played our Washington Generals role really well today to the West Coast Globetrotters,” Buckley said in reference to the Harlem Globetrotters basketball side, which routinely beat up on the Generals.

“It looked like we were out there to be the opposition to a side that had all the tricks, being clean inside, hard inside, effective with their offence, and really good with their ‘D’.

“The Eagles looked like they grew in confidence and in dare. They were really clean in everything they did and we were the opposite.

“We probably showed a soft underbelly today that isn’t us. We weren’t able to put our feet in the ground and stop from being pushed back.” 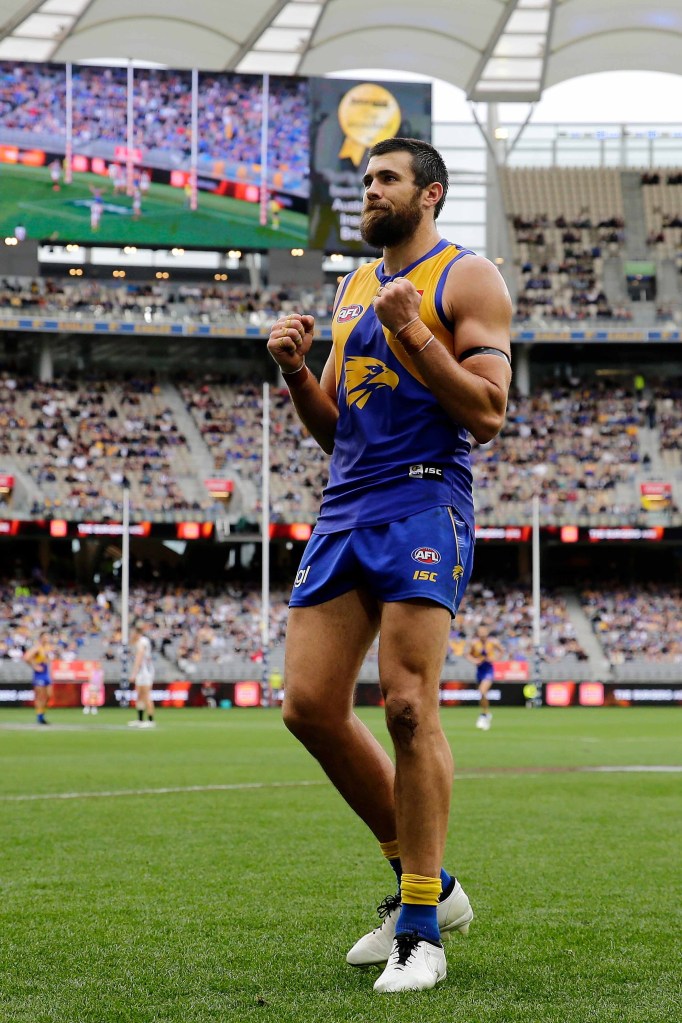 There was plenty of drama before the match as West Coast defender Jeremy McGovern (thumb) and Collingwood skipper Scott Pendlebury (tight quad) were both ruled out.

Pendlebury’s scratching was so late that his replacement Atu Bosenavulagi was still warming up after the opening bounce.

Kennedy booted three goals in the second quarter to turn the contest on its head, and the third quarter became a bloodbath as the Eagles booted 6.0 to Collingwood’s 0.3.

Eagles forward Liam Ryan kissed his black armband, pointed to the sky and shed some tears while being mobbed by his teammates after booting a goal early in the final quarter.

Ryan’s eight-year-old nephew died earlier in the week after being hit by a truck while riding his bike to school.

West Coast soar into fourth spot on the ladder, while Collingwood drop to seventh.

The Eagles are outright premiership favourites after their fourth win on the trot – not that Eagles coach Adam Simpson will pay too much attention to that.

“Are we? I mean it goes from being crisis to flag favourites,” Simpson said.

Simpson was glowing in his praise of Kennedy, with the veteran second in the Coleman Medal race with 18 goals.

WHAT HAPPENED IN ROUND 8 OF THE AFL

THEY SAID IT: “He milks a free kick as good as anyone in the competition and he did so again. You just wish they were consistently paid to everyone who is knocked off the ball like that.” – Hawthorn coach Alastair Clarkson after Tom Papley earned a free kick to boot back-to-back goals in Sydney’s seven-point win

STATS THAT MATTER: Adelaide’s record losing streak stands at 11 games after Essendon’s dramatic three-point win on Sunday at Adelaide Oval. The hapless Crows haven’t taken the premiership points since round 20 last season when they beat the Saints

KEY MOMENT: Tim Membrey’s acrobatic miracle goal in the final term at Adelaide Oval helped St Kilda to an upset win over Port Adelaide. Membrey didn’t even know he’d kicked it, but the score review showed Tom Jonas had punched the ball onto his opponent’s foot

TALKING POINT: The umpires were in the spotlight again, with the fluctuating interpretation of holding the ball causing widespread confusion. AFL legend Leigh Matthews called on the league to find a way to force coaches to ease congestion in the game instead of leaving the difficult task to umpires

TRIBUNAL WATCH: Adelaide’s Matt Crouch and Essendon’s Jacob Townsend were reported after the pair clashed heads in a heated tussle at halftime at Adelaide Oval. Hawks veteran Shaun Burgoyne escaped with a fine for his dangerous tackle on Sydney’s James Rowbottom

WHAT’S NEXT: The Western Bulldogs kick off round nine on Wednesday night when they take on Richmond at Metricon Stadium. Melbourne host Port Adelaide on Thursday night at the Gabba and Friday night footy features Carlton and Hawthorn at Optus Stadium, followed by Essendon and Brisbane at Metricon. West Coast’s clash with Geelong is the pick of Saturday’s matches, with plenty of interest around Gold Coast’s Sunday encounter with GWS.

So The AFL Is Now Planning To Bring Grand Final Forward