One of the most enduring medical dramas has been renewed for yet another season.

Grey’s Anatomy has been green-lighted for season 19.

Last year, series producer Shonda Rhimes discussed that she set the current season up to be used as a series finale, however wouldn’t decide until after contract negotiations with series lead Ellen Pompeo.

Pompeo (Meredith Grey) revealed that she would “continue the show as long as the fans and series producer Shonda Rhimes are passionate about it continuing.”

The decision to push on with a 19th season has divided fans, with some calling for the series to end. 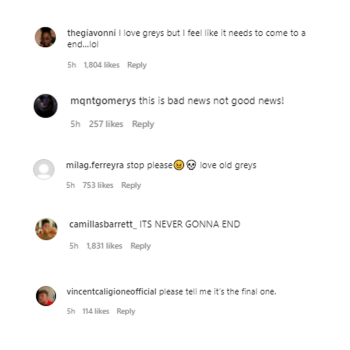 Pompeo currently earns approximately $600,000 USD per episode, making her the highest-paid actress on a drama series, with an annual salary upwards of $20m.

The renewal announcement comes just days after one of the main actors, Jesse Williams (Jackson Avery), revealed he would be leaving the season and not renewing his contract.

Whilst we have seen almost a complete cast change since the start of the series 18 years ago, season 19 will see the renewal of contracts for two other main actors who have stayed since the series start, including Chandra Wilson and James Pickens.

So, if you were anything like us and getting sad with the potential end of the show, not to stress, we get one more year (and hopefully make it to 20!)

Here’s What We Know About 'Selling Sunset' Season 5

Sex and The City Reboot Trailer Released, And Just Like That... Teases The Fate Of One Couple!

According To 'The Jetsons' Timeline, George Was Conceived Over The Weekend