After acquiring the club in 2007, Dr Bendat cemented the Wildcats’ status as an NBL powerhouse.

Under his leadership, the club won a massive six championships and qualified for a world-record 35 consecutive finals series.

Three-time NBL MVP Bryce Cotton, who joined the team in the 2016-17 season, recalled the huge impact Dr Bendat had on the team to Clairsy & Lisa… 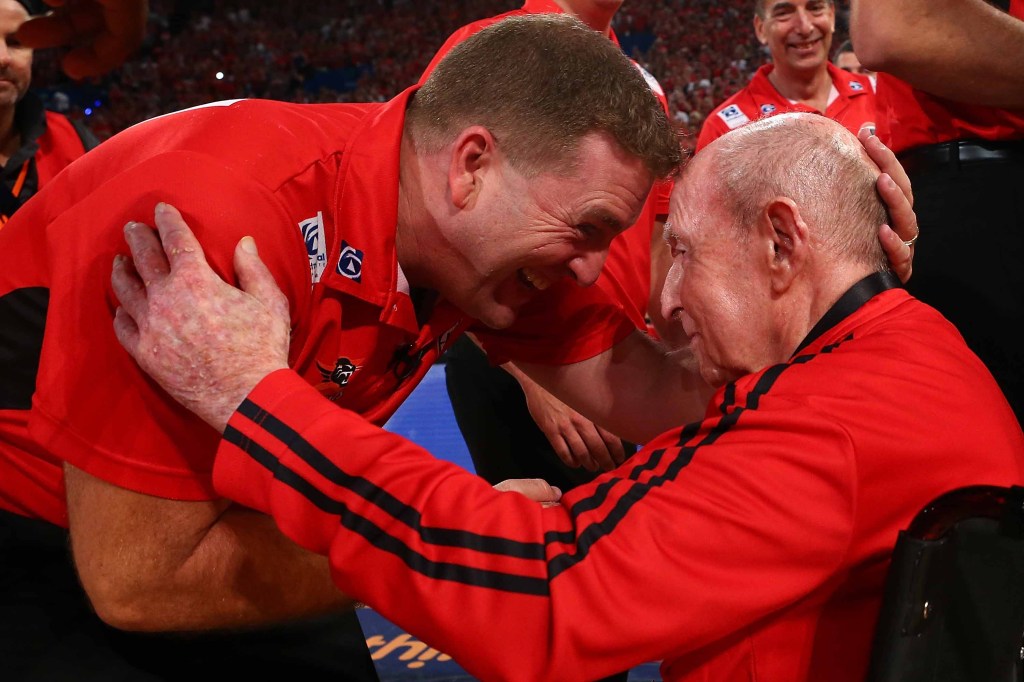 March 6, 2016: Trevor Gleeson celebrates with owner Jack Bendat after winning the championship during game three of the NBL Grand Final series between the Perth Wildcats and the New Zealand Breakers at Perth Arena.

Dr Bendat, after 14 years at the club’s helm, sold the Wildcats to the Sports Entertainment Group in 2021.

When he had put the feelers out for a buyer earlier that year, he famously only wanted to sell to a party who had the club’s best interests at heart.

Wildcats CEO Troy Georgiu said Dr Bendat left a lasting legacy on and off the court.

“We are deeply saddened to hear of the passing of Jack “ Georgiu said.

“While Jack demanded success on the court, his greater priority was for the club to make a positive impact on the West Australian community – particularly on school children in lower socio-economic areas.

“He used the profile of players to motivate students to improve literacy and numeracy while reducing truancy. He also saw the club’s brand an as an opportunity to promote a healthy lifestyle to the community.

“He was adored by the Red Army and nothing filled him with greater joy than seeing RAC Arena full of 13,000 fans wearing red and cheering the Wildcats on to victory.

“Jack’s impact on this organisation is immeasurable and his legacy ongoing. We are forever grateful for what he has done for basketball in Western Australia.”

He saved the Perth Wildcats, an iconic organisation he loved so much.

A love that was only surpassed by his commitment to wife Eleanor, his companion of 73 years.

Along with Brian Treasure, Dr Bendat was also a founding board member of New Broadcasting Pty Ltd, which originally owned 96FM when the station launched in 1980.

This Website Has Every Single Country's Restriction Status, Updated In Real Time

Did you know the collective noun for a group of Teddy Bears is a ‘hug’?