If it’s not one thing, it’s another for Elliot Yeo.

After literal months of being sidelined due to injury and club protocols – he’s played just two games this season – Yeo finally got some decent minutes in the WAFL against Swan Districts on Saturday… and got reported for striking.

He appeared to have his legs taken out by Swan Aidan Clarke while going for a mark in the fourth quarter of the Eagles’ 20-point loss.

After landing, Yeo got to his knees and lashed out at Clarke, who was left on his back. Vision showed Clarke immediately cover his face.

“Elliot Yeo there, got a bit heated. He’s not too happy with that one,” the commentator said. “A little bit of an old chokehold there, goodness gracious me.” 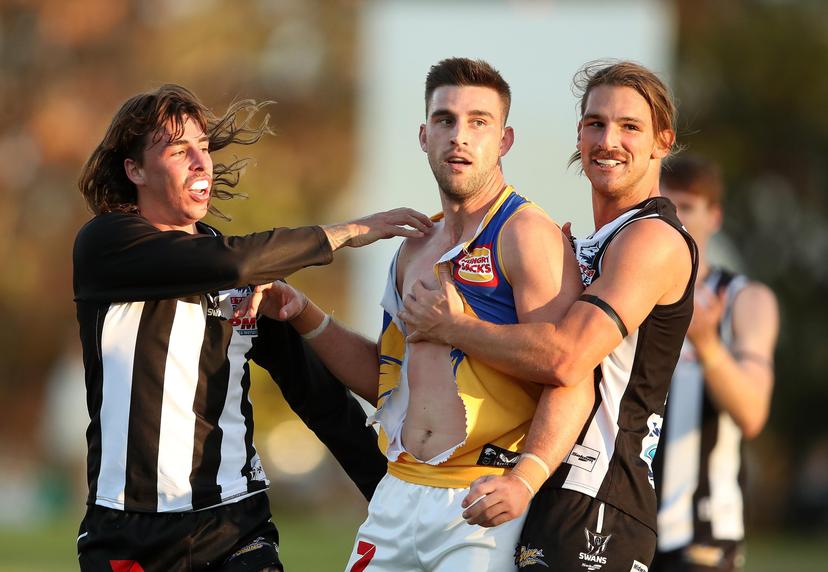 West Coast have a bye this weekend, meaning if Yeo attracts a one-match ban, he won’t miss any AFL games given the WAFL is still going ahead.

“I’m waiting to hear the verdict right now, so my lips are sealed… innocent until proven guilty.”

Hit PLAY to listen in to the whole chat…

'This Hasn’t Happened In More Than 80 Years’: The WAFL Stat Nat Fyfe's About To Rack Up

Vika and Linda would have fit in real well with Oasis...

Why Scorpions Have Tweaked The Lyrics To Their Perestroika Power Ballad, ‘Winds Of Change’

Linda & Vika Bull's Go-To Picks When Someone Says 'Carn, Sing Us A Song'