“If there was a Hall of Fame for the Hall of Fame speeches, that one would be inducted straight away,” is how Ryan Daniels described WAFL legend Bill Dempsey’s speech at the 2022 Hall of Fame award ceremony held on Tuesday night.

“There were eight inductees and WA had strong links with about five of them.”

Dempsey, who grew up as a member of the Stolen Generation at the Rhetta Dixon Mission Home in the NT before finding football, stole the show with his incredible story on losing (and finding) his 1969 Simpson Medal.

Dempsey played 343 games for West Perth between 1960-76 – the second-most in WAFL history.

Winmar played 251 AFL games for St Kilda and the Western Bulldogs, but is best remembered for an iconic moment in 1993 when he defiantly raised his Saints jumper and pointed to his chest.

He made the gesture after Collingwood fans had racially abused him during a match and is considered a landmark moment in Australian sporting history.

How did the Saints land Nicky Winmar?

Hear the story from the man himself. pic.twitter.com/spB1LjpAsR

Harvey and Pavlich were inducted as soon as they became eligible, five years after their retirements at the end of the 2016 season.

Pavlich, arguably Fremantle’s greatest AFL player, chalked up 353 games for the Dockers between 2000-16 and 700 goals.

The @freodockers champion is the first Australian Football Hall of Fame inductee of the night. pic.twitter.com/40O47S9dfh

Before he was the AFL chairman from 2008-17 – a tumultuous term that featured the Essendon drugs debacle and the Adam Goodes racism controversy – Mike Fitzpatrick was a premiership ruckman at Subiaco and Carlton.

Fitzpatrick captained the Blues to their 1981-82 flags.

Norwood premiership captain Michael Taylor had some great duels in the centre with Ebert, with Norwood-Port the SANFL’s fiercest rivalry.

Taylor played 289 games for the Redlegs in the 1978s and ’80s, split by 94 games for Collingwood, and he is a Norwood Hall Of Fame Legend.

Late Tasmanian great Terry Cashion was inducted for a career that featured the 1950 Tassie Medal at the national carnival and being named rover in the Tasmania team of the century.

Ebert is the only player to win four Magarey Medals, the SANFL’s equivalent of the Brownlow.

His wife Dian accepted the honour. 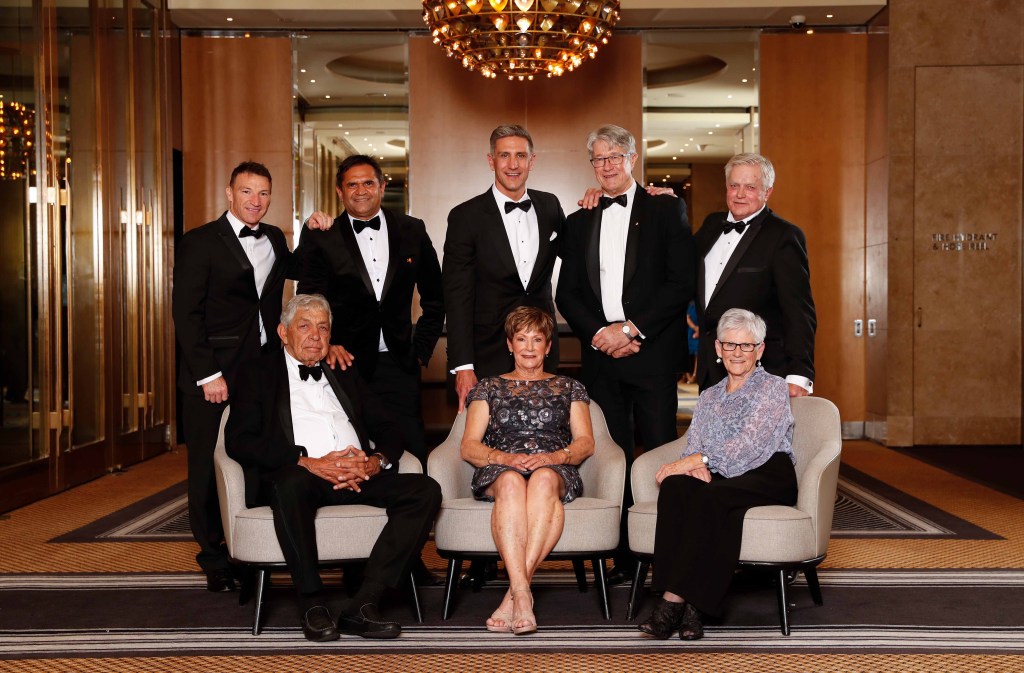 What do Rai Thistlethwayte of Thirsty Merc and Joe Satriani have in common?

Which name do you have trouble spelling?