Despite a severely undermanned West Coast, Ryan Daniels was all about the ‘great story lines tucked in’ to Sunday’s match against North.

The Kangaroos scrapped their way to a 10.14 (74) to 8.11 (59) victory after the Eagles were forced to make a record 14 changes to their side, having been smashed by a COVID-19 wave and injuries during the build-up.

But it was watching this ‘patchwork’ team, featuring three debutantes and five top-up players from their contingency list, that was actually… kinda delightful.

“There’s this great shot of Adam Simpson handing out the jumpers to the new guys before the game,” Ryan Daniels told Clairsy & Lisa on Monday morning. 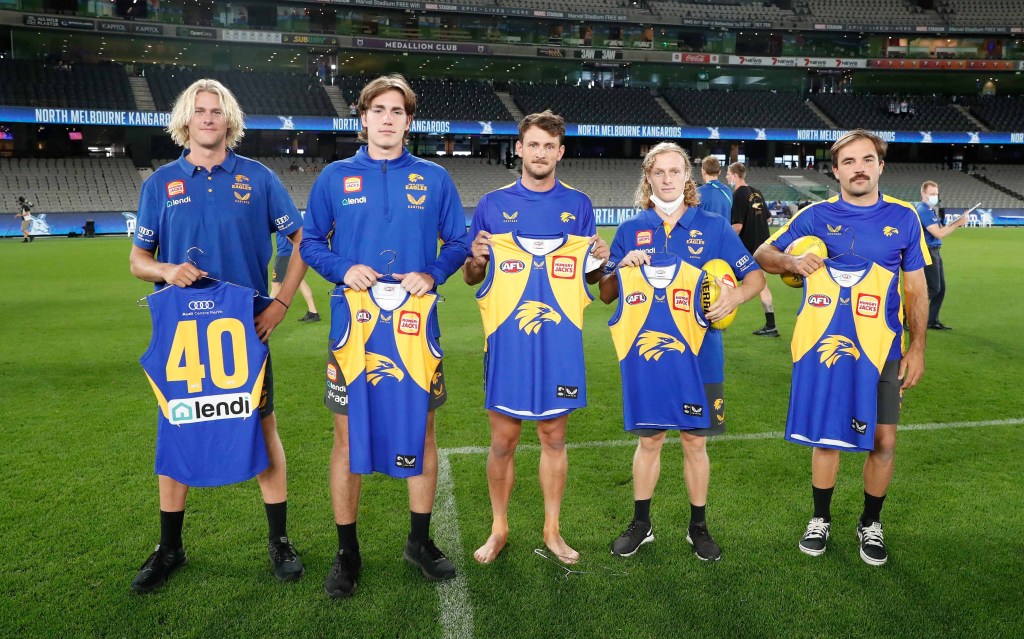 “You’ve got [West Perth midfielder] Aaron Black standing there, 29 with a moustache and he’s making his debut, this guy probably thought he’d never get that chance and this calamity of drama has enabled him to live out a dream, and he played really well!’

Then you have the game-day story of Declan Mountford, from Manypeaks near Albany.

Wow. Declan Mountford now in for @WestCoastEagles, Jackson Nelson late out. You can’t make this stuff up!

Dermott Brereton told Fox Footy he was briefly in the same lift as Mountford while on his way to the commentary box.

“One of the most amazing things in my time: I’m in the goods lift and I’ve seen the game has started and there was a fella walking into the lift. His name was Declan Mountford, still in his civvies going down to get changed at the 30-second mark of the first quarter,” he remarked.

Rhino added that Mountford was in the stands “probably eating some hot chips” when he got the call up that Jackson Nelson hurt his knee while warming up.

This Week, Jon Pinder Ate An Orange... The First One In His Life. WTF.

Police cannot confirm if the poodle is an accomplice or not.